*If you have a PlayStation 4

The RPG Greetings, traveller, and welcome to The Register Plays Games, our monthly gaming column back for the first time with an exclusive PlayStation 4 title. This was a big release surrounded by needless controversy and immense expectations that needed some time sunk into it. Does it stand up now the dust has settled? Absolutely.

Until The Walking Dead TV series drove it into the ground, zombies were cool. And by far the coolest take on the trope belongs to The Last of Us, a 2013 exclusive for the PlayStation 3 developed by Naughty Dog of Crash Bandicoot and Uncharted fame.

It's not a mysterious virus or necromantic ritual that turns the majority of humanity into shambling, flesh-eating freaks, but something at least slightly more believable – a mutated cordyceps fungus. If parasitic shrooms can do this to a variety of insect species, why shouldn't one crop up one day that targets people? Yes, OK. I'm not a biologist.

The Last of Us introduced Joel, a smuggler struggling to make ends meet in a world brought to its knees by the outbreak. By happenstance, Joel finds himself strong-armed into escorting a teenage girl, Ellie, out of the Boston quarantine zone by a "terrorist" organisation, the Fireflies. Why? She's immune, of course, and the only such example known.

Lockdown team building: Actualise the potentiality of your workforce... through the power of video games

What follows is a harrowing adventure across a post-apocalyptic United States in the hope of finding a cure. The pair come up against hordes of infected at various stages in the cordyceps' life cycle – from the still vaguely human "runners" to the blind, echolocating "clickers", and much worse – but, as always, other people remain the biggest bastards of all.

The Last of Us was critically acclaimed, and rightfully so. It elevated video games as a potential equal to film or literature due to its narrative focus, character development and excellent voice acting. It was also groundbreaking for console graphics. The remastered version for the PlayStation 4, released a year later, frequently leapt the Uncanny Valley in terms of facial and bodily animations. 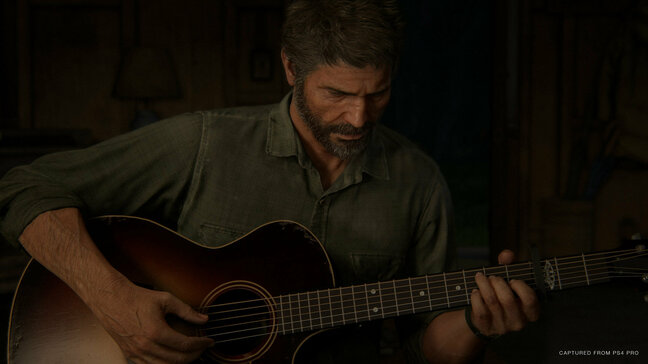 Hunky heart-throb Joel is looking a bit grizzled these days

So the sequel, out 19 June and in development since 2014, was as inevitable as it was hotly anticipated. Five years later, Joel and Ellie have settled with a community in Wyoming, but an encounter with another group sets Ellie on a collision course with one of its members, Abby. Lust for revenge takes Ellie and her girlfriend, Dinah, to Seattle after discovering their foes to be part of the Washington Liberation Front (WLF), a paramilitary organisation that wrested control of the state from the old-world Federal Disaster Response Agency (FEDRA). 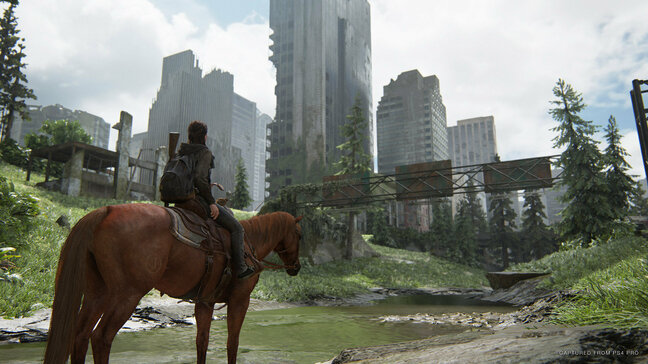 Ellie has free rein over a part of Seattle early on

What the series always had going for it was its open gameplay punctuated by HBO-tier cut scenes. The player guides the character from a third-person perspective, scouring the wasteland for resources; guns, ammo, and crafting materials to create bandages, explosives or improvised weapons. Finding everything possible is advisable because it will be needed when you run into infected or hostile survivors. The game blends stealth mechanics with third-person shooting and mild survival horror, not just because ammo is so scarce, but because the amount of sound you make directly correlates to your likelihood of being eaten or shot to pieces. When cover is broken, all guns blazing is often the only way out, but the player is able to approach a given scenario however they want. 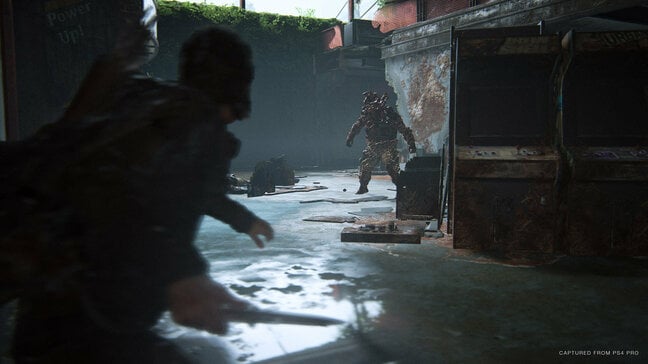 'Bloaters' are among the boss variants of the infected

The tone is identical in Part II with some added abilities. Characters can now go prone and use decades of undergrowth to flank enemies. Wow! There's a… wait for it… jump button! It also feels like you have to shake the controller to recharge your flashlight a whole lot less. Combat is much more fluid thanks to the incredible animation work, allowing enemies to be held as human shields while aiming a handgun over their shoulder, and stealth kills are slightly disturbing as the camera rotates to watch the light fade from your victim's eyes. Weapons – including a few new toys like the crossbow – are discovered in the field and can again be upgraded by finding parts, while player abilities are improved by collecting pills for some reason. The "listen" feature still tracks enemy positions through walls within a limited distance.

So not a huge amount has changed, but the trademark pacing of The Last of Us is a joy to return to. Whether it's a particularly intense firefight where the odds are stacked against you, or a frightening journey through the pitch-black belly of an infected nest, the periods of eerie exploration that follow come as sweet relief. 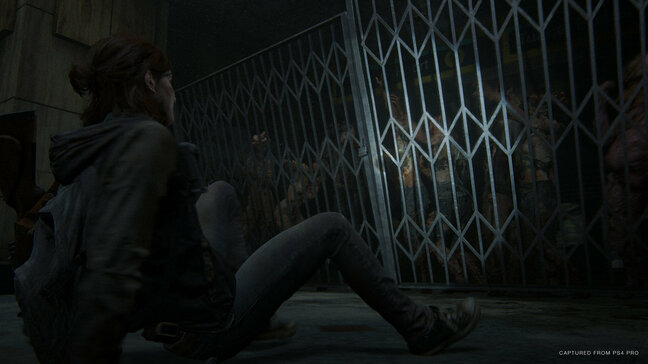 Chased by a horde in the Seattle underground

Ruined Seattle is stunning. Crippled high-rises dominate the skyline, relics of bombing in days gone by, and the streets are covered in lush seas of grass – a reminder that nature will do a lot better once we're all gone. The windows of abandoned storefronts can be smashed to pilfer what remains, and this often leads to little subplots unfolding through the discovery of notes left by survivors, sometimes revealing cache locations and safe codes. The game encourages you to leave no stone unturned. Early on, Part II briefly offers a bit of an open-world experience as Ellie is given a few blocks to search for clues on the WLF's whereabouts. Portions of the city can be traversed by horse and boat too, and bar a few textures belatedly popping in, the whole thing runs fine on a bog-standard PS4 – not that there's much you can do to improve performance. 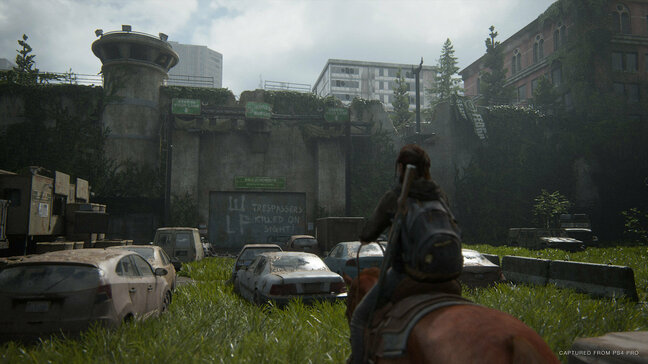 The WLF have pulled back from the city's outer limits

But it's the second half where things really hit their stride. As Ellie gains on Abby, her humanity gradually sloughs off into a bloody puddle on the ground – thanks to some particularly shocking murders – and you're left wondering if you're even the good guy. All signs seem to point to the game ending until you take control of Abby, find out about her background and why she, too, is such a massive arsehole. Ellie's evil nemesis is revealed to be an ordinary person – with arms like tree trunks, mind – hauling traumatic baggage and motivations all of her own, and you may well find yourself rooting for her too. The allegory isn't novel, but there's nothing wrong with reminding people that "revenge is a sucker's game" and "there are two sides to every story". 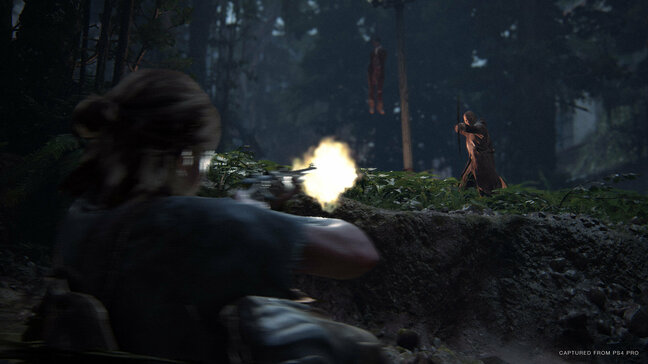 Taking a shot can knock Ellie on her back

Abby's portion also gets up close and personal with the Seraphites or "Scars", a technophobe cult at war with the WLF, two of whom she helps escape punishment because the younger sister cut her hair off and ran away after being pledged as a bride. It emerges that she is actually a he, or identifies as such, and it's interesting that gender topics are touched upon in the writing among a cast brimming with strong female characters, even if it's surface level. To be sure, there will be criticism of it out there for both the wrong and right reasons. 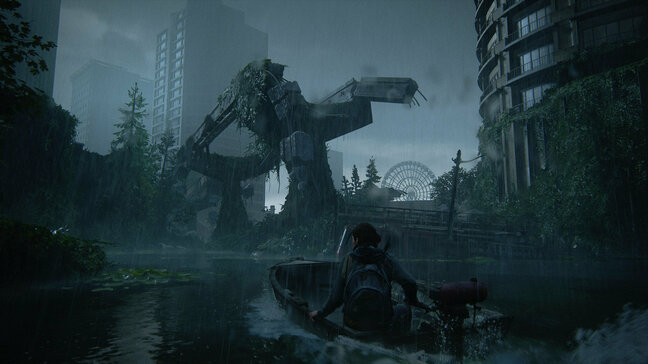 Parts of Seattle can only be traversed by boat

At which point we must address the elephant in the room. The Last of Us Part II was review-bombed on Metacritic within hours of release, when no one could have conceivably finished what is a 30-hour-plus adventure. There seem to be a range of reasons – protest over leaked plot points, "misleading" marketing, daring to represent underserved minorities, Ellie's sexuality, women in general, a "social justice warrior" agenda, blah blah blah. But all faux complaints come from a place of entitlement, made worse by the herd mentality of a vocal minority always seen shouting on the internet, and it's embarrassing for the rest of us. As for plot, I liked everything these people claimed to hate, and I hadn't spoiled the game for myself. If these things would stop you from enjoying what is yet another brilliant coup for Sony, you are a loser.

Pay numbers on an aggregated user-review website no heed; if you own a PlayStation 4, you need to play this game, and stick with it through the plodding opening. Just make sure you've grabbed a copy of The Last of Us Remastered out of the bargain bin first. ®

All screenshots taken from here because everything about grabbing stills on the PlayStation 4 is a total pain so don't expect them to be entirely representative.

God of War: How do you improve on perfection? You port it to PC, obviously