Astronomers have spied a tiny galaxy with the lowest oxygen levels yet observed, a discovery made possible thanks to a machine-learning algorithm.

The galaxy, dubbed HSC J1631+4426, contains just 1.6 per cent of the total amount of oxygen locked in our Sun – the lowest levels yet seen, beating the previous record by just a smidgen.

These extremely metal-poor galaxies are rare; they tend to be small, formless dwarf galaxies that contain a small smattering of stars. The lack of heavier elements such as oxygen is a sign that the galaxy is still in its primordial stage. 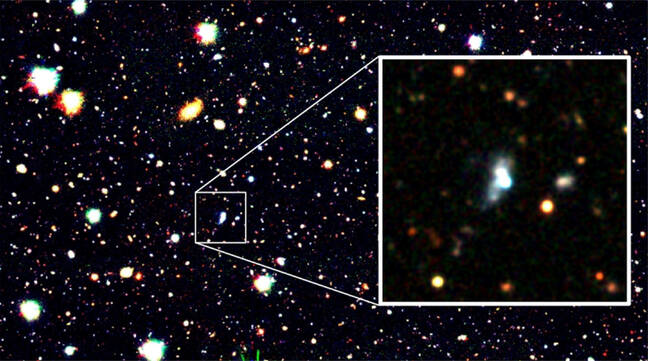 The stars in HSC J1631+4426 are its first population. Observing the galaxy could help scientists piece together how galaxies form and evolve over time from small jumbled masses to giant, well-defined structures like our Milky Way. "We suggest that such an oxygen deficient galaxy was formed very recently from pristine gas," Takashi Kojima, a PhD student at the University of Tokyo, told The Register. Kojima coauthored a study into the galaxy, which is to be published in the Astrophysical Journal [preprint].

Spotting these extremely metal-poor galaxies is challenging. It's difficult to stand out among the mind-boggling number of celestial objects snapped by the 8.2-metre Subaru Telescope, used in the Hyper Suprime-Cam Subaru Strategic Survey. Scientists have collected large amounts of data from the survey since 2014 – too much for them to manually sort through and inspect. That’s a job more suited for computer algorithms.

Thus, astrophysicists, led by the University of Tokyo and the National Astronomical Observatory of Japan, built a neural network to spot these oxygen-starved galaxies. They trained the software to spot the fuzzy galaxies by their color and brightness. The software also learned to ignore other types of objects, such as quasars.

The millions of bright specks in the images captured in the survey were whittled down to 107 potentially interesting low-oxygen galaxies – including HSC J1631+4426 – using the neural network. That number was narrowed down further to 27. Follow-up observations revealed that the galaxy, located 430 million light-years away in the constellation Hercules, had the least amount of oxygen in its stars compared to all the other galaxies that have been studied yet. In fact, our Sun has more than 60 times more oxygen than the galaxy itself.

“What is surprising is that the stellar mass of the HSC J1631+4426 galaxy is very small: 0.8 million solar masses,” said Masami Ouchi, a coauthor of the study and a cosmology professor at the University of Tokyo. “This stellar mass is only about 1/100,000 of our Milky Way galaxy, and comparable to the mass of a star cluster in our Milky Way.” ®