Astronomers discovered an exoplanet for the first time using the astrometry technique with ground-based radio telescopes, according to fresh research published in The Astronomical Journal on Tuesday.

Astrometry involves tracing tiny, irregular motions of a star to spot the telltale sign that it’s being tugged by the gravitational pull of an orbiting planet. It’s notoriously difficult to detect these slight movements, however, since stars are much more massive than their companions. Many objects claimed to have been discovered using astrometry have often later been flagged as false positives. 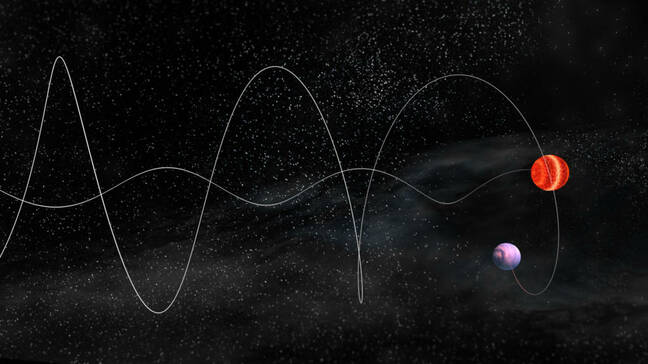 I was born, 'round a wobbling star: An illustration showing the gravitational effect of a planet on its sun's path of travel. Credit: Bill Saxton, NRAO/AUI/NSF. Click to enlarge

Now, for the first time, apparently, a team of scientists led by the National Autonomous University of Mexico reckon they have managed to use stellar astrometry with ground-based radio telescopes to find a new object around a small dwarf star just 35 light-years from Earth. Codenamed TVLM 513b, the exoplanet has a similar mass to Saturn, and orbits its host star every 221 days at a distance shorter than Mercury is to our own Sun – specifically, about 27.9 million miles.

“I would say that this is the first very clear detection of a planet using ground-based astrometry,” Amy Mioduszewski, co-author of the paper and an associate scientist at America's National Radio Astronomy Observatory, told The Register.

Give us the tools...

Astrometry is the oldest method used to detect exoplanets, and was abandoned in favor of the transit method, which has helped scientists find more than 4,000 extrasolar planets since the 1990s. Now that sensors have improved, however, instruments are sensitive enough for the astrometric detection of exoplanets.

The discovery of TVLM 513b was made using a group of ground-based radio telescopes collectively known as the Very Large Baseline Array (VLBA) headquartered in New Mexico.

“The VLBA is very good at astrometry. When observations are made they are referenced to a background quasar which is close to the star,” Mioduszewski said. "Quasars are very far away so they do not move so the star’s motion is measured with respect to that stationary quasar. Not all stars emit bright enough radio waves for the VLBA to observe but stars that are low mass are more likely to emit enough radio to be observed."

The technique typically finds heavy huge planets with distant orbits, though in this case, it found a large world with a relatively tight orbit, noted Salvador Curiel, first author of the paper and an astronomer at the National Autonomous University of Mexico.

“Giant planets, like Jupiter and Saturn, are expected to be rare around small stars like this one, and the astrometric technique is best at finding Jupiter-like planets in wide orbits, so we were surprised to find a lower mass, Saturn-like planet in a relatively compact orbit,” he said.

UK Space ponders going nuclear with Rolls-Royce: Hopes are to slice the time it takes for space travel

Another year, another study

Plans week-long orbital mission, with Chicken Korma already pencilled in on the menu