Scientists have developed a tiny, implantable, self-powered, wireless transmitter chip for monitoring and treating glaucoma patients and other biomedical applications.

The 2.4GHz ultra-low power transmitter is about the size of a grain of sand, said Pedro Irazoqui, the Reilly Professor of Biomedical Engineering and professor of electrical and computer engineering at America's Purdue University, in a phone interview with The Register on Tuesday.

"It came about because we developed a technology that allowed us to stimulate the interior of the eye in a contact lens," added Irazoqui, who is also the CTO of Bionode, a Purdue-affiliated startup working on a contact lens capable of treating glaucoma.

The transmitter is designed to be implanted in a glaucoma patient's eye to broadcast measurements of their eye pressure which, if too high, can damage the optic nerve and cause blindness. These readings can be used by physicians to determine whether to apply electrical current to normalize intraocular pressure.

The gizmo is described in this paper, published by IEEE Transactions on Circuits and Systems II. 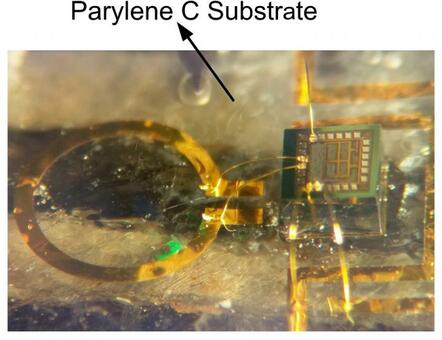 Irazoqui said a lot of medical treatments operate in an open loop. "You take antibiotics, but no one is measuring their effectiveness," he said. "What you really want to know is how the body is responding in real-time."

Having an implanted device that can report biomedical data and apply a therapeutic response closes that loop, he suggests.

Rather than relying on a battery, which isn't something people want in their bodies, the transmitter harvests power by converting radio frequency waves into direct current, using cavity-resonator based magnetic resonance coupling.

"Basically we don't want batteries," said Dr Hansraj Bhamra, a research and development scientist who created the technology, in a phone interview with The Register. "Nobody likes to have big batteries to wear."

According to Bhamra, the transmitter has an energy efficiency of 7 pico-Jule per transmitted digital bit, making it the lowest energy consumption transmitter reported publicly to date. In active-mode, it consumes 70 micro-Watts at 10Mbps while radiating -33dBm of power. In sleep-mode, its power dissipation is 128 pico-Watts.

The Purdue boffins implemented their own wireless communication interface, but they say their chip can easily accommodate Wi-Fi or Bluetooth because it operates at 2.4GHz.

The transmitter, created using 0.18 micrometer CMOS, is made with biocompatible materials like gold, silicon, and a polymer called Parylene. It relies on several innovative techniques to achieve its power efficiency and small size.

For example, it incorporates a voltage-controlled oscillator (VCO) with NMOS and PMOS cross-coupled transistors that support 2x lower startup current and 10.5db lower phase noise at 1MHz offset than an implementation that only uses standard NMOS or PMOS components.

Irazoqui said testing to determine how long the chip will last hasn't yet been done but he hopes it will run for at least five to 10 years. The device has been implanted in a lab rat but hasn't yet been tried in people.

While the transmitter was designed for glaucoma treatment, Irazoqui suggests it could be used in other scenarios where real-time biomedical interaction is helpful, like heart disease, cancer treatment, or epilepsy. ®