The OnePlus Nord is one of the most heavily hyped phones of 2020. In addition to being OnePlus's first real stab at the mid-range in several years, it also has the distinction of being reasonably easy to repair, according to iFixit.

Awarding a repairability score of 6/10, iFixit applauded the modular nature of the phone, with individual components easily removed and replaced. Unlike other devices which use various different screw types, the Nord is consistent in using just one Phillips driver type.

iFixit also gave OnePlus kudos for its restrained use of glue. While some components are affixed with an adhesive (like the battery), there's only really a light dusting, allowing the gizmo to be serviced without the use of a heat gun.

OnePlus did fall down in some areas, however. By virtue of the phone's design, the most common repairs (like battery and screen replacement) require the phone to be virtually disassembled and the logic board removed. That massively complicates simple fixes that – on competing devices, like the iPhone SE 2020 – can take less than an hour to complete. 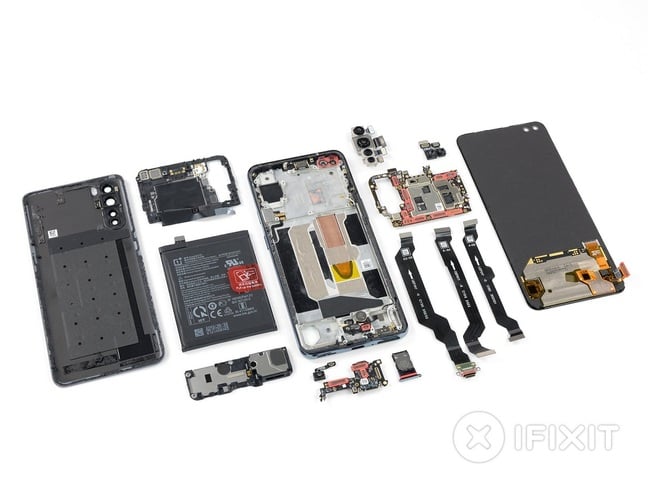 OnePlus Nord with gut splayed out

Still, the Nord manages to surpass previous devices from the manufacturer in terms of repairability, including the OnePlus 7 Pro (which has a repairability score of four) and the 7T (which scored five).

While the Nord isn't the most expensive phone on the market, it's not uncommon for people to hang onto their devices for longer periods of time. You can thank the increasing irrelevance of the 24-month contract for that.

Though most people don't have the gall to take a spudger to their latest shiny, it's at least comforting to know that a relatively simple fault won't necessarily result in having to completely replace their phone. ®