Or maybe a spleen? Stomach? Snot bubble? You decide

Pic Not only does the good ol’ Sun provide us with light and warmth, its solar wind casts around the planetary system a protective magnetic bubble that’s probably shaped like a... deflated croissant.

You’d probably get away with describing it looking like a slightly misshapen spleen or a stomach if you're not into baked goods analogies. Regardless of what you see in the image, scientists have attempted to study this odd structure for years. Initially, they reckoned it resembled a comet: spherical with a trailing tail.

The latest computer model, however, shows the shape is more lumpy and vague. NASA has dubbed it a depressed pastry.

Technically known as the heliosphere, the giant blob is made up of charged particles emitted from the Sun. The nearest edge to Earth is ten billion miles away; its sheer size and the fact we live inside it makes it difficult to observe. Its job is to mostly shield our system from galactic cosmic rays, which can damage electronics and living cells. Earth is thankfully further protected by its own magnetic field and atmosphere; craft out in the obsidian void has to fend for itself. 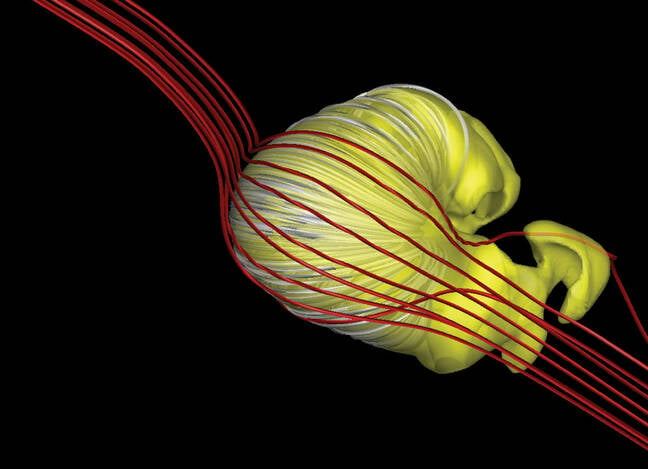 The only probes that have ventured to the heliosphere's edge are NASA's Voyager 1 and 2, which have provided some information on the bottle.

Now, astronomers have refined the model of the blob by piecing together various bits of solar wind data collected from NASA’s Cassini and New Horizons probes. The US agency said Cassini carried equipment that observed particles bouncing back into the Solar System, which helped define the heliosphere’s boundary. Meanwhile, New Horizons measured so-called pick-up ions that are picked up from space and carried along by the Sun's solar winds. These pick-up ions are much hotter than the particles streaming out from the Sun.

Merav Opher – lead author of a paper detailing the croissant-like model, published in Nature Astronomy, and an astronomy professor at America's Boston University – said these hot pick-up ions and not-so-hot solar-stream particles mix, and this combination reveals the true outer shape, hopefully, of the heliosphere.

“There are two fluids mixed together. You have one component that is very cold and one component that is much hotter, the pick-up ions,” she said. “If you have some cold fluid and hot fluid, and you put them in space, they won’t mix – they will evolve mostly separately. What we did was separate these two components of the solar wind and model the resulting 3D shape of the heliosphere.”

Plotting the deflated croissant shape is important for future space missions as it shows where spacecraft is protected, and where it isn't.

Scientists will also be able to map its shape in more detail thanks to an upcoming mission. NASA is expected to launch the Interstellar Mapping and Acceleration Probe in 2024 that will carry various instruments to detect charged particles, pick-up ions, and more to better understand how the solar wind interacts with the interstellar medium in the Milky Way. ®

Humanity has officially touched the Sun (or, at least, one of its probes has)

We finally get to spot a burnt-out comet and what is it covered in? Talcum powder

UCL astronomer tells us: 'We were surprised by our discovery'
Science2 Apr 2021 | 36