Mars pulses with ultraviolet light three times a night during spring and autumn, according to boffins from the University of Colorado's Laboratory for Atmospheric and Space Physics (LASP).

Detailed in a new paper titled Imaging of Martian Circulation Patterns and Atmospheric Tides Through MAVEN/IUVS Nightglow Observations, the paper explains that during Martian Spring and Autumn vertical winds carry gases from high in the Martian atmosphere to regions of higher density and to the nightside of the planet. That movement brings together nitrogen and oxygen atoms which, when they combine into a nitric oxide (NO) molecule, spit out an ultraviolet photon.

Enough of those photons are emitted, and in a short enough time, that the MAVEN Mars orbiter has been able to perceive three distinct flashes each night using its Imaging Ultraviolet Spectrograph (IUVS) instrument.

The three incidents take place just after sunset, and the first is the brightest. 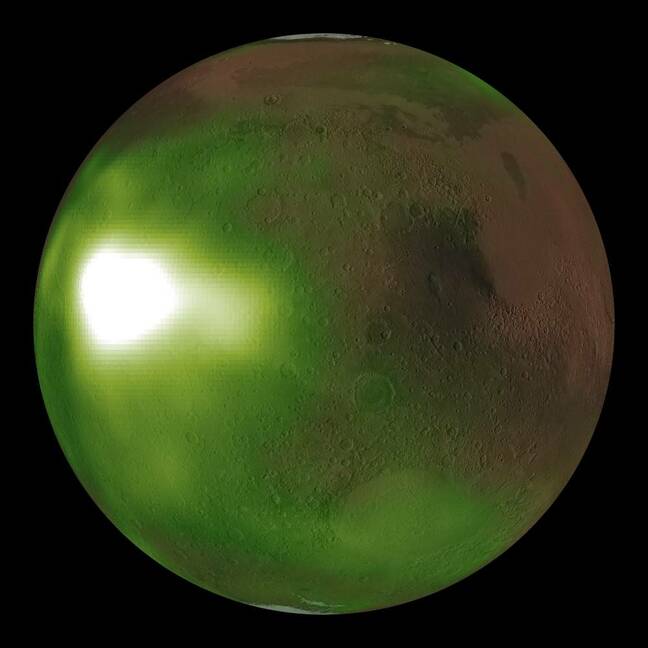 NASA’s take on the research is: “The pulsations reveal the importance of planet-encircling waves in the Mars atmosphere. The number of waves and their speed indicates that Mars’ middle atmosphere is influenced by the daily pattern of solar heating and disturbances from the topography of Mars’ huge volcanic mountains. These pulsating spots are the clearest evidence that the middle atmosphere waves match those known to dominate the layers above and below.”

NASA and the LASP boffins now plan to look at the phenomenon from side-on, to get a different perspective on Martian weather and further enhance our understanding of the red planet. ®