Microsoft has released a bunch of updates to its Visual Studio development tool on Windows and Mac, including an extension that provides full diagnostics and code completion for the Angular TypeScript/JavaScript framework.

Angular is of special interest to Microsoft developers, despite being a Google-developed open-source framework. The reason is that ASP.NET and ASP.NET Core, Microsoft's server-side web framework, work well in conjunction with Angular and a template for using Angular is bundled with Visual Studio.

However, an issue is that Visual Studio is inferior to the free and cross-platform Visual Studio Code (VS Code) when it comes to JavaScript and TypeScript development. In the case of Angular, there is a Language Service which drives advanced editor features, but it only works with VS Code, JetBrains WebStorm, and Sublime Text. Visual Studio developers only got basic TypeScript support.

This is now fixed. Microsoft has created a Visual Studio extension that adds the Angular Language Service, though you need at least version 16.5 (the update to Visual Studio 2019 released in March 2020) to install it. 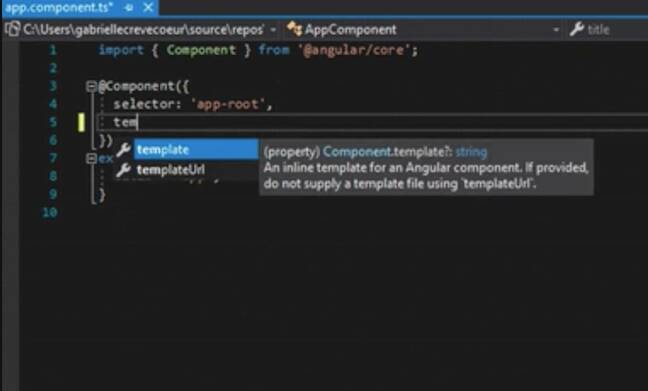 This is helpful for Angular/.NET Core developers, though it highlights an issue Microsoft has created for itself thanks to the popularity of VS Code, which is rated the most used code editor in most surveys. 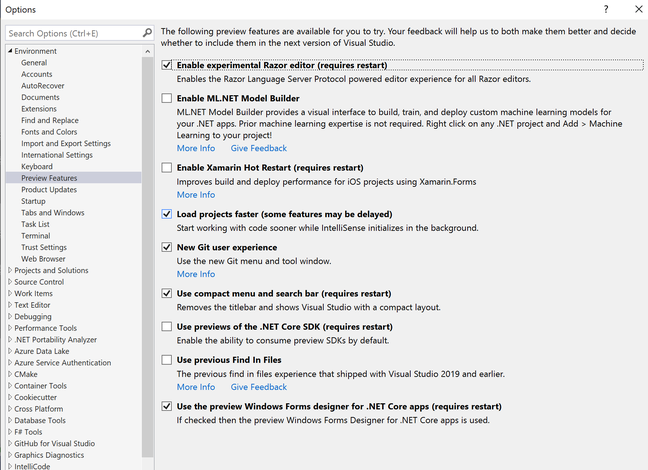 Preview features in Visual Studio 2019 16.7, including the New Git Experience

The result is that VS Code has excellent support for a huge variety of languages and platforms. Flutter, for example, which uses the Dart language, has a strong VS Code extension but nothing for Visual Studio.

On the other hand, Visual Studio remains the best experience for .NET languages and frameworks, Windows applications and libraries using Visual C++, and Xamarin mobile applications.

Developers who find themselves mixing and matching – for example, working on a .NET Core Web API to be called from a Flutter client application – may either use two different IDEs, or even do all their work in VS Code, which has fair support for C# and .NET, for the sake of its better support for other languages and platforms.

New on the Windows side is the Git integration and merge editor previewed last month, including a new Git Repository window. This has to be enabled in Visual Studio's massive Options dialog, in the Environment – Preview Features section, where there is a checkbox for New Git user experience.

A Git top-level menu appears and under View there are new entries for Git Changes and Git Repository – though we found that the Git Repository window still does not appear in Visual Studio 16.7, only in the 16.8 preview. For those who can persuade it to appear, you can create new repositories, view commit and stash messages, manage Git branches and view commits. The new merge editor has been redesigned to be less cluttered and with better support for merges and conflict editing.

An enhancement for Azure Kubernetes (AKS) developers is the ability to write, test, and debug code locally while connected to other services running in AKS. There are also updates to refactoring .NET code, an experimental new Razor editor (for ASP.NET Core applications), and a new .NET Performance Counters tool.

Windows Forms developers now have a preview Forms Designer when using .NET Core as opposed to .NET Framework, though this too has to be enabled as a preview feature.

Users of Visual Studio 2019 for Mac miss out on much that is in the Windows version, but there are a few new features in version 8.7, including the ability to generate an API client from an OpenAPI or gRPC service, updates to the unit test support in C#, and additional support for Xamarin Forms 4.8.

Visual Studio for Mac began as a Xamarin IDE, and is the only one of Microsoft's tools to support creating macOS applications. ®