Eat out to BSOD?*

Bork!Bork!Bork! A return to form for burger-botherers McDonald's with a summertime BSOD in today's entry in The Register's diary of distressed digital signage.

Today we present a branch of the chain in Chelmsford, in the leafy home county of Essex, just northeast of London. The screen that might once have indicated who was next in line for greasy goodness now warns of a page fault in a non-paged area as Windows demonstrates all the resilience of a McFlurry flung at a wall.

This BSOD was spotted by an eagle-eyed Register reader seeking to sate his son's desire for a Happy Meal and earn a blissful few minutes of peace while the poppet chowed down on chips (before asking where the usual bit of plastic tat was). 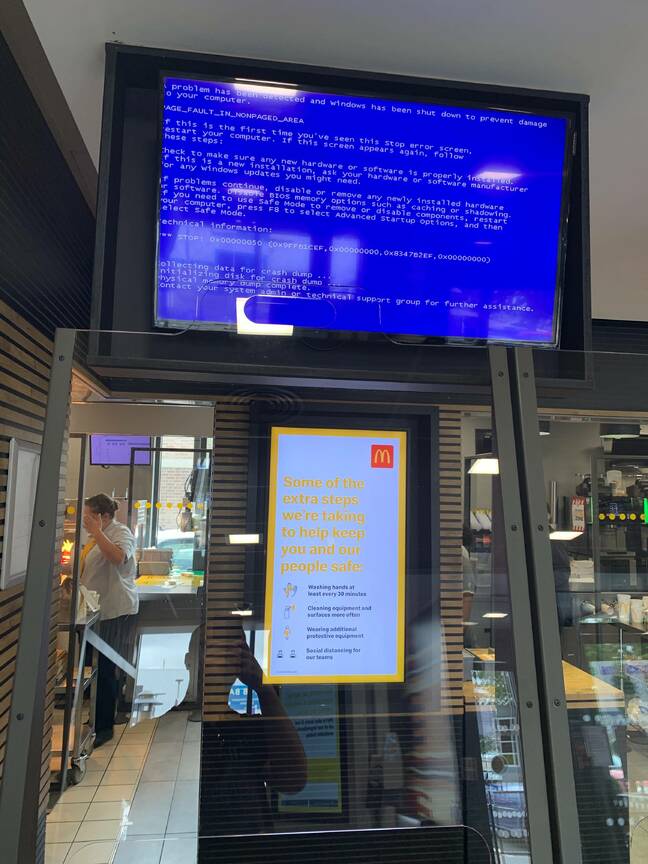 Preferring to remain anonymous, our contributor told us: "We were burning off some of the sprogs' excess lockdown energy at a recently reopened playground when hunger struck.

"Any reasonable person would have headed home and rustled up ham sandwiches for all, yet the missus informed me that the cupboards were bare. 'McDonald's?' she asked, cautiously. Stony-faced, I drove to us to the nearest patty-pusher, which, incidentally, had also opened its doors properly for the first time in months, to be greeted by this classic BSOD where the takeaway queue is normally displayed.

"Little did I know it would be a harbinger for the state of my digestive system a little down the line. I think I might have an intolerance.

"The kids were fine."

The error itself is vomited up by the OS when code attempts to prod at a bit of memory it shouldn't. It can be caused by duff drivers, over enthusiastic antivirus, borked NTFS or perhaps a bit of broken RAM.

Still, burger-seekers wondering where their next clown-based fast-food fix might be coming from can at least take solace from the extra steps the newly reopened outlet has taken to make their customers feel a little safer in these interesting times, including washing hands and more frequent equipment cleaning.

We first noted the chain's BSOD-happy habits back in January, when the world was a very different place and customers thought nothing of pawing at screens reportedly coated with all manner of delights before opening up their bags of horror-stench on the night train.

Times may have changed, but we are pleased to note that the company's front-of-house signage seems as wobbly as ever. ®

* Although our bork witness was too early to take advantage, the UK government is currently running a scheme called "Eat Out to Help Out" to try to boost the ailing food 'n' hospitality sector, offering the public govt-subsidised money-off offers. The UK Treasury said yesterday that more than 10.5 million meals had been claimed in the first week of the scheme.