Data from NASA's now-defunct Dawn spacecraft orbiting Ceres has shown that the largest object in the Solar System's asteroid belt has sub-surface oceans and recent volcanic activity, according to a group of papers published in Nature journals.

In the first study led by NASA JPL's Carol Raymond, the geological scientists based their findings on data collected by the Dawn space probe, which orbited Ceres from 2015 to 2018 before it ran out of fuel.

Four years ago, NASA revealed an icy volcanic dome on the surface of the body, evidence of cryovolcanic activity.

Now the agency's Raymond and colleagues have revealed the fruit of their labours studying the Occator crater, a 20-million-year-old feature that exhibits bright deposits, in the paper "Impact-driven mobilization of deep crustal brines on dwarf planet Ceres". 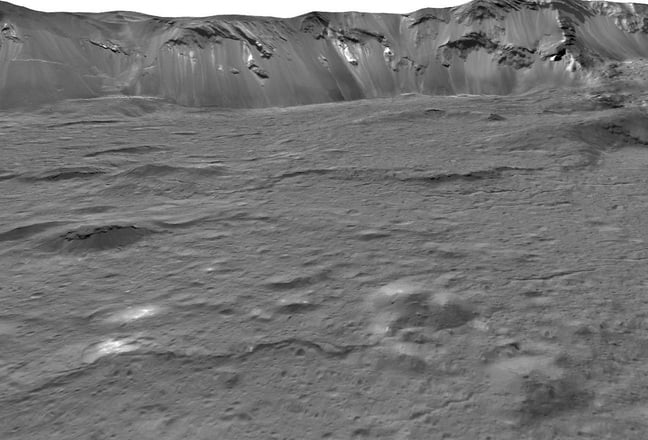 Occator Crater on Ceres based on images from NASA's Dawn spacecraft. Image: NASA/JPL-Caltech/UCLA/MPS/DLR/IDA/USRA/LPI

In the last phase of the Dawn mission between June and October 2018, the probe descended to 35km above the surface and performed imaging, infrared spectroscopy, elemental spectroscopy and gravity science.

The study focused on the bright salt deposits on the planet's surface, which puzzled scientists. Were they a result of the eruption of brine from deep under the surface and remnants of an ancient ocean, or from a shallow impact melt chamber?

The planetary scientists looked at high-resolution images of the Dawn Framing Camera that suggested a recent period of cryovolcanic activity, which began around nine million years ago and lasted for several million years. They also discovered several events suggesting liquid was reaching the surface millions of years after the crater formed.

"These findings are indicative of a deep-seated brine source," the authors said.

Salty water still seems to be coming to the surface. In a separate paper, "Fresh emplacement of hydrated sodium chloride on Ceres from ascending salty fluids", also in Nature Astronomy, Maria Cristina De Sanctis, of Rome's Istituto Nazionale di Astrofisica and colleagues reported the presence of hydrated chloride salts at the centre of Cerealia Facula, the largest bright spot in the middle of the crater.

As these salts lose water quickly, the authors suggest they are evidence that brine still exists in the interior of the Ceres.

The discovery of subsurface water on Ceres adds to recent Dawn-related discoveries. In 2018, a research letter published in Geophysical Research Letters showed there is a higher concentration of carbon-based compounds on its surface than previously estimated.

While fellow dwarf planet Pluto is 14 times bigger and millions of kilometres away, the latest work looking at Ceres suggests they have more in common than once thought. Pluto, too, may have supported subsurface oceans early in its development. ®