And smartphone that shows you its innards if required

Chinese consumer goods manufacturer Xiaomi has celebrated its tenth birthday with the release of a transparent television.

The 55-inch Mi TV LUX offers a substantial cylindrical base, a metal bezel and - at a glance - not much else. Xiaomi has offered some verbiage about the tellie making images appear to float in a virtual space, but we’ll spare you the quotes on this occasion.

Transparent OLEDs have been offered as a digital signage option for a few years now and your humble hack has beheld them frozen into fridge. Xiaomi reckons it has become the first company to turn them into televisions and crank them out in the kind of quantities demanded by consumers. Although just how many people can afford the RMB 49,999 (US$7,200) the device will cost remains to be seen, especially as it will only be sold in China. 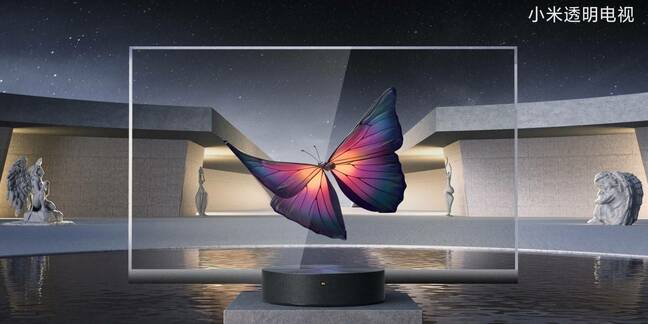 The The Mi TV LUX Transparent TV
Click to enlarge

The tellie was launched at a 10th-birthday bash for the company at which founder and CEO Lei Jun delivered a mostly sugar-coated history of the company that did at least recall early hiring difficulties and the company’s flop when first entering India in 2015.

Xiaomi is now the dominant smartphone vendor on the sub-continent and the birthday bash included the launch of two new devices that should do well there. The Mi 10 Ultra packs a 120x zoom camera and 120w wired charging said to fill the 3500Mah battery in 23 minutes. The phone is sold for around $760 in China and offers a transparent model that lets users peer through the screen to see its innards.

The $290 X30 is a 5G affair that boasts a 64MP main camera and a 20MP pop-up selfie shooter. Both phones feature a 6.67″ OLED display. There's no word on when either will make it beyond the Middle Kingdom. ®