The light from the red supergiant Betelgeuse dimmed to a record low earlier this year, leading stargazers to speculate it was about to explode as a supernova. But now it appears the aging sun merely had a stellar sneeze.

Last autumn, Betelgeuse started going dark, losing two thirds of its brightness by February. Yet by May, the enormo-orb had recovered to its usual luster. The latest readings from the Hubble Space Telescope appear to explain why.

A team of astronomers led by the Harvard-Smithsonian Center for Astrophysics (CfA) reckon the supergiant was undergoing a severe outgassing event that saw it spew a chunk of its mass out into space that blocked it from view.

“With Hubble, we had previously observed hot convection cells on the surface of Betelgeuse and in the fall of 2019 we discovered a large amount of dense hot gas moving outwards through Betelgeuse’s extended atmosphere,” said Andrea Dupree, CfA’s associate director and lead author of a study into the winking sun, published in The Astrophysical Journal.

“We think this gas cooled down millions of miles outside the star to form the dust that blocked the southern part of the star imaged in January and February." 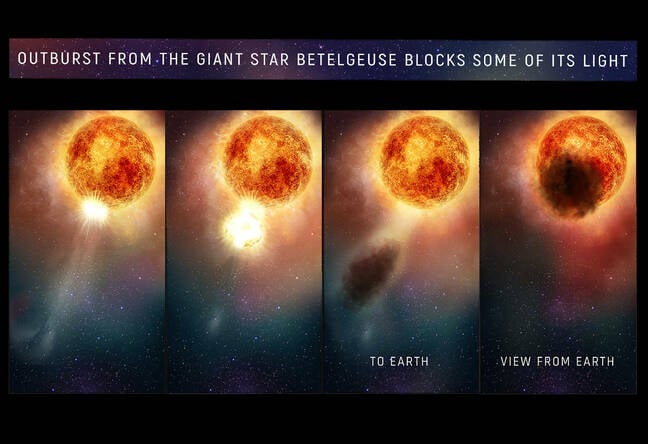 Dupree compared the behavior to a “sneeze” – the star, which is about 650 light years away from Earth, expelled large amounts of plasma and gas as it shrunk. The material then cooled and coalesced to form denser dust grains that blocked out its light.

“Maybe when it had that huge sneeze from September to November 2019, when we saw the material being ejected, maybe that changed the structure of the outer atmosphere? Maybe there is another outburst going on and more dust is forming,” she told The Register.

“All stars are losing material to the interstellar medium, and we don’t know how this material is lost. Is it a smooth wind blowing all the time? Or does it come in fits and starts, perhaps with an event such as we discovered on Betelgeuse.

"We know that other hotter luminous stars lose material and it quickly turns to dust making the star appear much fainter. But in over a century-and-a-half, this has not happened to Betelgeuse. It’s very unique."

The mystery doesn’t stop there. The dust may have dispersed, yet Betelgeuse is once again growing fainter before our eyes, and has been fading away since June. “We do not know why. It has one brightness and dimming cycle of about 420 days, and this does not seem to fit,” Dupree added.