IBM takes Power10 processors down to 7nm with Samsung, due to ship by end of 2021

Up to 15 SMT8 CPU cores per socket, Power ISA 3.1 support, and other bits and bytes

Hot Chips Big Blue hopes to roll out its first commercial 7nm data-center-grade processors – the IBM Power10 series – by the end of 2021.

Each Samsung-fabricated chip packs 18 billion transistors into a 602mm2 die, and up to 15 cores that can be used for compute. Each CPU core can run up to eight threads simultaneously (SMT8), and clocked at up to 4GHz or thereabouts. Each of these 64-bit processors sports up to 120MB of L3 cache plus support for PCIe 5 running up to 32GT/s, Open Memory Interface (OMI) running up to 1TB/s, and IBM's PowerAxon interconnect for adding OpenCAPI accelerators, IO, and more memory, again running up to 1TB/s.

Interestingly enough, there are 16 cores on the die. IBM distinguished engineer William Starke, who works on Power, told The Register: "As is the case for any large processor chip made by any vendor, the natural outcome of the manufacturing process results in different SKUs with varying core counts, with a limited fraction of all-core-good parts. Given the Power ecosystem's high demand for highest core-count offerings, it is economically best to provide a manufacturing spare, to vastly increase the percentage of highest core-count parts."

Every chip maker does so-called binning, based on defects and characteristics of the final dies, it's just interesting to see IBM hold one spare, so that the official specs say "up to 15" CPU cores rather than up to 16. 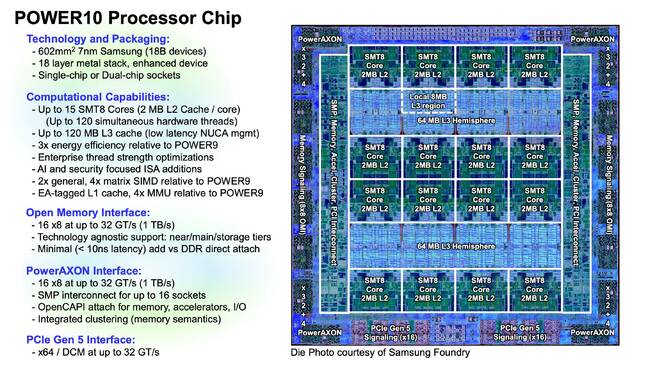 We're told Power10's architecture has a focus on accelerating matrix math operations for use in AI, and is designed with the needs of Red Hat's OpenShift in mind. It also features four times as many AES encryption engines compared to the Power9 family, provides hardware-level protections for containers running within virtual machines – so one bad container can't turn on its neighbors, apparently – and has built-in defenses to hopefully prevent data-leaking side-channel attacks.

It supports memory access within clusters of machines, allowing multiple petabytes of data in RAM to be shared via PowerAxon.

Power10 is more suited to inference than training, IBM pointed out. Training is intensive enough to require accelerators, such as GPUs and FPGAs. Overall, to our eyes, the microprocessor is pitched at enterprise, cloud, and AI inference workloads. NVlink support, for talking to Nvidia graphics chips, is included in PowerAxon, though the marketing from Big Blue is all about OpenCAPI via PowerAxon, and PCIe 5, for add-on accelerators. 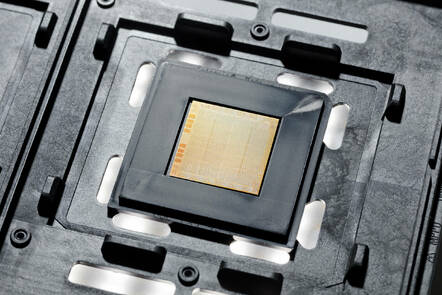 Upcoming chip ... A Power10 processor in all its glory. Click to enlarge. Source: IBM

Other upgrades include improved memory bandwidth, and more L2 cache memory: 2MB per core. It all means that each Power10 core has about 2.6 times the performance-per-watt rating of its Power9 sibling, IBM said. You can have up to 16 sockets in a single system, and up to 4TB per socket of OMI-connected DDR DRAM shifting up to 410GB/s, depending on the machine design and configuration. Alternatively, you can use GDDR or HBM and get up to 800GB/s.

Power veep Steve Sibley told The Register IBM was aiming to ship Power10 chips to customers by the fourth quarter of next year. Power10 is IBM's first Samsung-fabricated 7nm offering, and the pair of tech giants began collaborating in 2015 when IBM pledged $3bn in R&D toward next-gen Power processors.

You can find a selection of slides with more technical details on Power10, including the microarchitecture, from IBM right here [PDF]. Big Blue is due to discuss its new designs at the now-virtual Hot Chips conference today. ®