Not now, Gartner. We've had enough of the future to last a lifetime: Meet 'Formative AI' and 'Algorithmic Trust'

You can call me Al

For a year that belongs in a Philip K Dick novella, now is not the time to welcome prophets of the technological future, and yet here comes Gartner, banging on the door with its Emerging Technologies Hype Cycle.

According to the gurus of the Cycle, freshly emerged tech must first climb the "Peak of Inflated Expectations" before sliding down into the "Trough of Disillusionment", where it sheds a salty tear before crawling out of the dust and climbing again up the "Slope of Enlightenment" before finally cresting, if all goes well and Gartner doesn't disappear it, the "Plateau of Productivity". 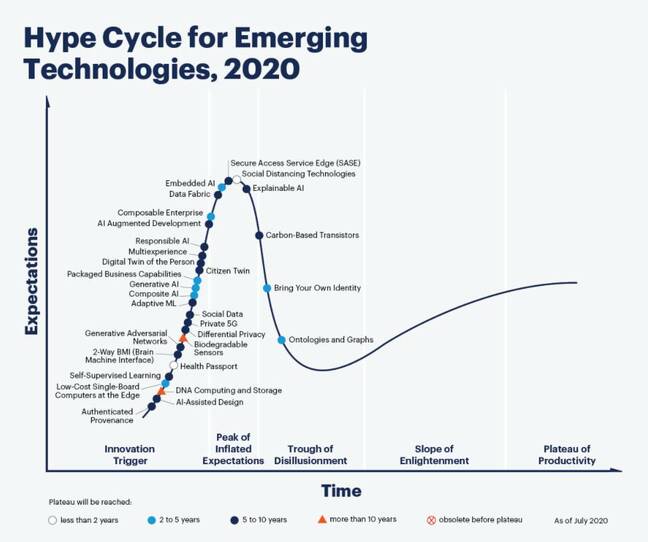 So let's meet some of this year's "Emerging" climbers. Rather than a form of urban transport powered by the user's ego alone, the Hype Cycle is a perennial forecasting showcase in which the omnipresent IT analyst company dips into its rattle bag of hip techno-jargon to transfix an emerging generation of executives.

As such, it offers a Top of the Pops for management phraseology – along with an arguable amount of insight into emerging trends – which will no doubt soon coat whiteboards from Reading to Swindon in buzzword balderdash.

WTF is cloud-tethered compute? We're not sure either, but it just made a hype cycle for the first time

At number five in the hit parade, is Digital Me. No, not the minion-inhabited film franchise. It's not even about me or you. It's about our digital twins: "Representations of ourselves, such as digital passports and social distancing technologies."

"Digital twins of humans provide models of individuals that can represent people in both the physical and digital space," said Gartner.

The research firm explained that our interface with the digital world is moving beyond screens and keyboards, and is already on its way to include voice, vision and gestures... so much more data to flesh-out your digital twin. Then it blithely went on to predict that the two-way interaction will give the digital universe leave to "directly alter our brains" as if that is absolutely fine and nothing could possibly go wrong.

A new entry at number four is Composite Architecture. This approach to business computing comes in the form of "packaged business capabilities built upon a flexible data fabric". It is only natural then that these "capabilities" come with an intelligence that is "decentralised and extends outward to edge devices and the end user".

Track this trend, Gartner recommended, if you're a company that wants to be more agile in your development methodology. Say that to the CFO: it will be fine.

The non-mover at number three is Formative AI. The great litmus test for bullshit in the business lexicon turns red in the presence of tautology, but nevertheless the analyst firm insisted that AI models will "evolve dynamically", by which it means develop its own models.

"Some of these technologies are used by application developers and UX designers to create new solutions by using AI enabled tools. Other technologies enable the development of AI models that can evolve dynamically to adapt over time. The most advanced can generate entirely novel models that are targeted to solve specific problems."

Digital Mes and Formative AIs will come to nothing without Gartner's number two – Algorithmic Trust. Apparently without irony, the analyst firm said: "Models based on responsible authorities are being replaced by algorithmic trust models to ensure privacy and security of data, source of assets and identity of individuals and things."

And so we drag our feet wearily to the number-one spot, which is occupied by Beyond Silicon. The premise is that Moore's Law is coming up against the physical limits of silicon and "new advanced materials are creating breakthrough opportunities to make technologies faster and smaller".

"Critical technologies to be considered include DNA computing, biodegradable sensors and carbon-based transistors," said Gartner, closing with a flurry of technologies as yet unproven outside the lab.

Predicting the future is nice work if you can get it. In 2017, the analyst said that a brain-computer interface would be hitting its production stride around 2027, although this year it has morphed into a two-way brain-machine interface, which is currently climbing the peak of Inflated Expectations to come barrelling up to the Plateau as early as 2025, heaven help us. We're watching the Slope of Enlightenment carefully. We might send a commercial UAV after it – it should be on the slope right now. Oh hang on, it has disappeared. ®