A space rock the size of a sports utility vehicle zoomed within 2,950km of Earth over the weekend.

It's good news because, as NASA explained, the 15 August flyby of 2020 QG was the closest pass humanity has ever detected and therefore speaks to our enormous cleverness.

"It's quite an accomplishment to find these tiny close-in asteroids in the first place, because they pass by so fast," said Paul Chodas, director of the Center for Near-Earth Object Studies at NASA's Jet Propulsion Laboratory. "There's typically only a short window of a couple of days before or after close approach when this small of an asteroid is close enough to Earth to be bright enough but not so close that it moves too fast in the sky to be detected by a telescope." 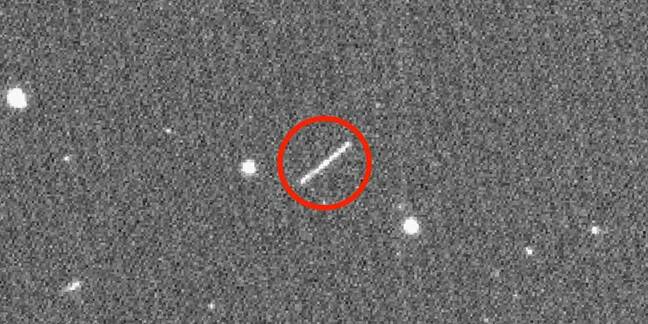 The circled streak in the center of this image is asteroid 2020 QG. Credits: ZTF/Caltech Optical Observatories

But the less-good news is that we spotted it on the way out.

As NASA detailed, 2020QG sped past at 12.3 kilometres per second, and "was first recorded as just a long streak in a wide-field camera image taken by the Zwicky Transient Facility. The image was taken six hours after the closest point of approach as the asteroid was heading away from Earth."

Back to some good news: even if we had failed to spot the rock, it was too small to make it through Earth's atmosphere and do any damage. NASA reckons it would have been visible as a fireball. And those, as your humble hack discovered when walking home a couple of months back, can be awesome as seen in the tweet below depicting my cosmic encounter. ®

A meteor has just been spotted roaring over New South Wales. These pictures were captured on the Central Coast show a ball of light burning with a fiery green tinge. https://t.co/NzTYUwIP33 #7NEWS pic.twitter.com/ecNCY9otYv