Reader research We expect more than half of our office seats to go remote in the wake of the coronavirus pandemic, a slim majority of Register-reading tech pros told us.

We surveyed a few hundred IT decision makers last month on their priorities and projects in light of the COVID-19 outbreak disrupting society and business, and here are our main takeaways. Just over one in two respondents, or 54 per cent, said at least half of their seats are going remote, with North America (NA) leading the charge, which may be linked to the US government's handling of the pandemic. 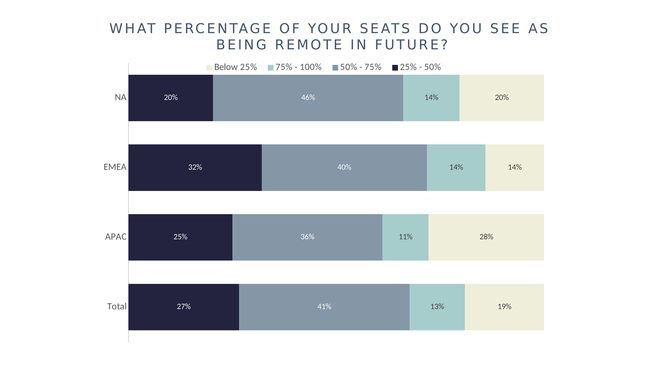 The larger orgs were over-represented here, with 71 per cent of 1,000-plus-staffed company respondents seeing over half of their seats located outside of an office. That dropped to 67 per cent for companies with fewer than 250 workers and 61 per cent for SMBs with 251 to 1,000 employees. This is, we reckon, because larger businesses have the resources and infrastructure to manage remote workers, and smaller outfits can be fast-moving and flexible. 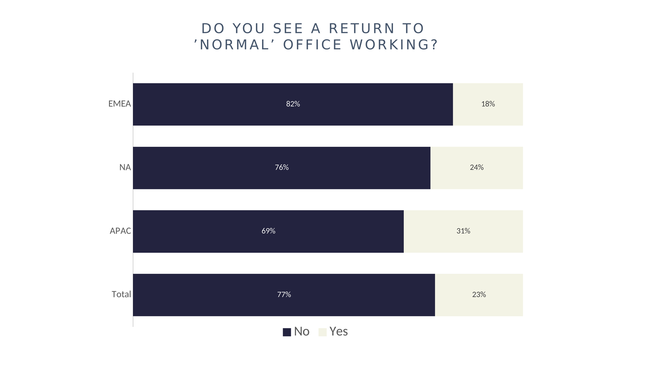 Just 23 per cent of respondents said they saw a return to normal office working, with a slight rise to 24 per cent by those readers from the Asia-Pacific (APAC) geographies. Everyone else pretty much accepts the new normal of a spread-out workforce. 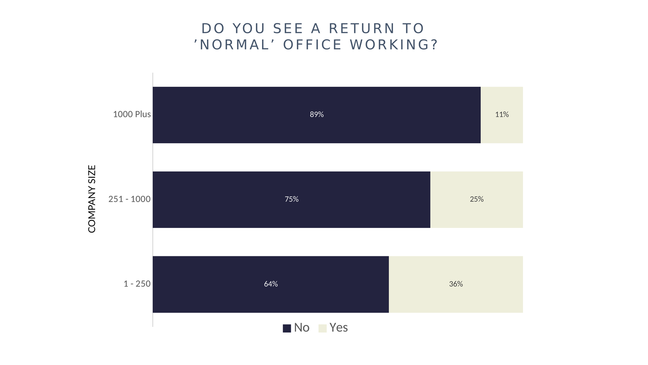 There was a much greater disparity when it came to larger firms versus the smaller outfits on this point. Just 11 per cent of those making IT decisions in 1,000-plus companies saw a return to "normality" for office workers, which increased to 36 per cent for those working at firms staffed with fewer than 250 people.

This makes sense in the context of larger companies having higher office-related overheads, such as land leases. For example, during HPE's Q2 2020, the first accounting period showing some of the impact of the pandemic, the firm said the whopping $1bn in savings it hopes to realise will partly come from clawing back cash it spends on keeping its staffs' desks firmly plonked on an air-conditioned, carpet-tiled floor.

Another big takeaway is that in the post-lockdown world, everyone we surveyed has become laser-focused on one thing: security. We're picturing systems to protect information exchanged by staff working from their kitchen tables and spare bedrooms, out of immediate or obvious reach of IT. Technology to lock down access so that if a remote worker's login is compromised, the damage that can be done is contained. And defenses that take into account the much larger network perimeter as a result of a dispersed workforce: just because someone has an internal IP address doesn't mean they sat at a machine in an office having gone through physical security at the door. They're logged in remotely, via a VPN, and they could be anyone.

In both the short term and longer term, the largest proportion of decision makers – 27 per cent – placed security as their top priority, understandably so. Even code-hosting biz GitLab has not been immune to the security pitfalls posed by working from home. In May, it saw one in five of its work-from-home staff happily fall for a phishing lure set by its own in-house pentesters. (Bear in mind that this is much better than industry averages.)

The next short-term priority for respondents are the new business processes firms must inevitably put into place (17 per cent) and end-user hardware/software (15 per cent). In the longer term, home workers' kit gets a lot less attention: just seven per cent of our respondents saw it as a priority beyond the immediate future.

And although on-premises kit has been shoved to the back burner both in the near and longer term – as evidenced by the increase in cloud spend from $185.2bn in 2018 to $233bn in 2019 – 14 per cent of our respondents were looking at hybrid gear as a priority over the longer term to bridge the gap between public and private.

On-premises gear, overwhelmingly, has seen the collective back of our respondents turned on it. 38 per cent of respondents have "significantly deprioritised" on-prem, again chiming in with IDC's new cloud figures. That leapt up to 47 per cent for respondents from companies with more than 1,000 workers.

The future is not just remote, it seems, it's who's got the remote control? ®