Crack this mystery: Something rotated the ice shell around Jupiter's Europa millions of years ago, fracturing it

You broke it, you pay for it

A new study of the ice shell encrusting Europa, Jupiter's sixth-closest moon, suggests it is free-floating and shifted 70 degrees after a major geologic event rotated the surface several millions of years ago.

Astronomers at the Universities Space Research Association's Lunar and Planetary Institute; the University of Arizona; and the University of California, Santa Cruz, in the US discovered evidence of what's called the "true polar wander" event after they analyzed the satellite's surface. Maps generated from data gathered by NASA's Galileo and Voyager spacecraft revealed a series of odd, large fractures measuring more than 200 metres deep, showing the crust had moved massively.

The pattern of the etchings suggest that they were formed when Europa's surface was reoriented away from its spin axis. The move changes the original direction of its physical poles, and in this case it's rotated by 70 degrees.

"Our key finding is that the fractures associated with true polar wander on Europa cross-cut all terrains," said Paul Shenk, first author of the study published in Geophysical Research Letters, and a planetary geologist at the LPI. 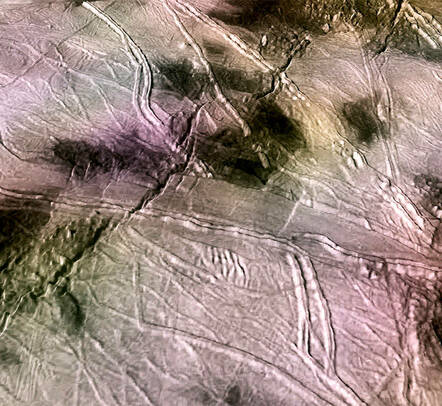 "This means that the true polar wander event is very young and that the ice shell and all features formed on it have moved more than 70 degrees of latitude from where they first formed. If true, then the entire recorded history of tectonics on Europa should be reevaluated."

True polar wander also supports the hypothesis that Europa harbors a global liquid ocean that may be warm beneath its icy exterior. The scientists argued that such a large shift could only happen if its outer shell separated from the moon's rocky core and was free to float on a layer of water.

"In addition to generating global-scale tectonic features, true polar wander also produces global-scale gravity and shape perturbations, which affects gravity and shape constraints on the interior structure," said Isamu Matsuyama, co-author of the paper and an associate professor of astrobiology at the University of Arizona.

The team believes that the shift means older features on the moon's surface are not in their original positions anymore. Scientists will have to go back and reassess previous research looking at how the moon might have evolved over time.

The next step is to work out the ages of each fracture to piece together the polar wander event. Scientists are rushing to study the moon to help shape NASA's Europa Clipper 2024 mission that will see a probe making 45 close flybys to find out whether its environment might make it suitable for alien life. ®