The US Air Force has revealed a prototype of a flying car, something the American military has desired for at least a decade.

The latest build is single-person aircraft – specifically, a version of the Lift Hexa copter, which uses 18 electric motors that allow it to take off and land vertically. The vehicle was put through its paces last Friday at the Texas State Guard's Camp Mabry base.

The craft is part of a project the Air Force is running called Agility Prime, which has tapped up Lift and other manufacturers to develop single-person "flying car" aircraft for field tests within the next three years. Other prototypes will be showcased in the coming weeks.

"We now have over fifteen of the leading aircraft manufacturers in the world applying to partner with Agility Prime, with many of them already on contract,” said Col Nathan Diller, head of the project and director of the Air Force's incubator AFWERX program.

"This flight today marks the first of many demonstrations and near term flight tests designed to reduce the technical risk and prepare for Agility Prime fielding in 2023.” 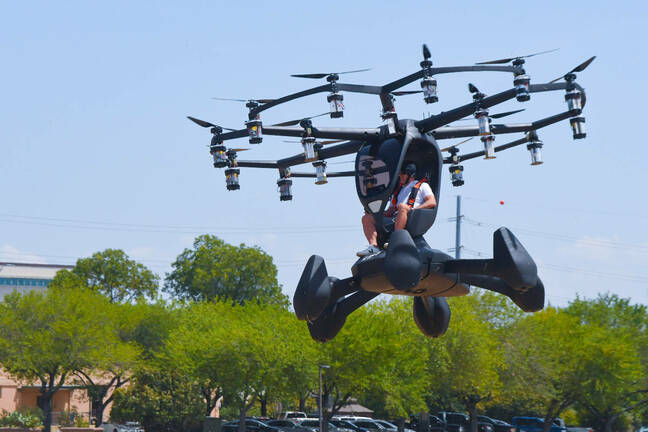 The US Air Force hopes to add the Agility Prime flyers to its arsenal of military aircraft, which is the largest of its kind in the world. "The thought of an electric vertical take-off and landing vehicle — a flying car — might seem straight out of a Hollywood movie," Barrett said back when the project was launched, "but by partnering today with stakeholders across industries and agencies, we can set up the United States for this aerospace phenomenon."

Seeing as the prototype looks like it would survive as long as a snowflake in a blast furnace during combat, we're assuming the machines will be used where helicopters, warplanes or unmanned drones are not needed, not available, or deemed inappropriate. We can't help be skeptical because although flying cars have been promised for decades, we have yet to see anything resembling a practical, affordable design, let alone a plan for how they would be safely operated in large numbers.

Need we remind you of things like the promised flying Uber cars, or the Chinese EHang 184, or the AeroMobil, or the VTOL hybrid flying car, or, well, you get the you get the point.

In short, this is a promising effort by the Air Force, though we'll believe the "flying car" hype when the top brass starts approving these machines for use in anger. ®

Beijing official says crackdown on tech companies is over