RasPad 3.0 converts Raspberry Pi 4 to a tablet – be prepared for some quirks

Wedge-shaped fondleslab for fun projects, coders will need a keyboard, and you'll just have to ignore the fan

Hands-on Sunfounder, based in Shenzhen, China, has released RasPad 3.0, a 10-inch, 1280-by-800 touchscreen for the Raspberry Pi 4, packaged in a wedge-shaped case with a battery that converts your Pi into a tablet computer.

This is Sunfounder’s third go at a Pi fondleslab. The first RasPad, based on Raspberry Pi 3B+, came out in 2018 following a successful crowdfunding project on Kickstarter, raising over $600,000. RasPad 2.0 was a minor update in June 2019, the main changes being in the customized RasPad OS, based on Raspberry Pi OS though with a (to some extent) touch-friendly user interface.

In tune with the original concept for the Pi itself, the RasPad is aimed primarily at “creative projects,” including programming, controlling devices, and interacting with sensors. You can also use it as a general-purpose tablet, though it is rather chunky for this.

RasPad 3.0 is updated for the Pi 4.0, which performs substantially better than its predecessor, has USB 3.0 ports in place of USB 2.0, and a few refinements such as an external microSD slot, making it easier to boot into a different OS.

We got our hands on an early release of RasPad 3.0, into which we fitted our own Pi 4.0. A little bit of assembly is required, but first impressions were good, thanks to the smart printed manual which explains all the steps, and some thoughtful touches like including a screwdriver with a magnetic tip, ideal for small screws. 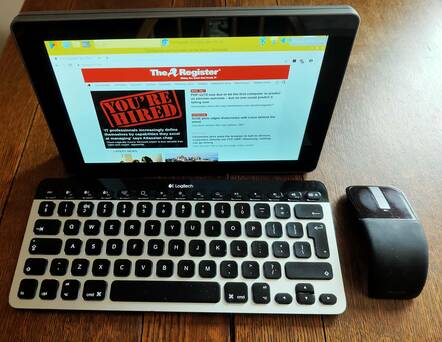 Mostly it is a matter of plugging in cables to connect the Pi to the RasPad boards. There is also the matter of cooling. RasPad 3.0 comes with three stick-on heat sinks, for the processor, RAM and USB chip connector. There is then a small case-mounted fan which sucks in air. It is better than nothing but not an ideal arrangement, since the fan is on the base of the RasPad and small rubber feet give very little clearance, impeding the flow of air.

The fan is also noisy, and this is perhaps the worst thing about the RasPad. Users will want to expend their initial creative energy in either quietening or finding an alternative to the fan.

The Pi’s GPIO header ends up inside the case, but there is a slit in the case to enable a ribbon cable (not supplied) to connect accessories. There is also an accelerometer which fits on three pins of the GPIO header, to allow auto screen rotation. There is access to the CSI (Camera Serial Interface) port again on the base.

When we first assembled the RasPad there was a technical glitch downloading the RasPad OS (the dreaded “Access denied,”) so we used the standard Raspberry Pi OS. Installation took two tries, the first one freezing during OS updates, but everything worked second time around.

Raspberry Pi OS is hard to use out of the box on RasPad though, unless you connect a keyboard and mouse, but the touch screen worked. By installing the Matchbox touch keyboard it was possible, but not fun, to use without additional peripherals.

The problem with the RasPad OS download was fixed the next day so we tried that - though we wondered why it is not (as far as we can see) an open source project. It makes a much better initial experience, though there was no prompt to connect to Wi-Fi and we had to do that manually.

The home screen is touch-friendly, but the perception of touch usability soon disappears if you try and do anything that requires text input. RasPad OS installs the Matchbox touch keyboard by default, but it is basic compared to the best touch keyboards on Android, iOS or Windows.

What this means is that using RasPad for programming or general purpose computing needs a keyboard and, if the GUI is required, a mouse. On the other hand, creating or installing an application designed for touch control and RasPad comes into its own.

RasPad OS comes with several programming tools pre-installed, including Scratch for visual programming, Mu and Thonny editors for Python and the Geany text editor. LXPanel is installed for managing running applications. Then there is the Chromium web browser (which soon complained about being unable to update), LibreOffice, VLC media player, Minecraft and a few other games.

There's no Visual Studio Code but we installed this successfully via the community build here. Raspberry Pi OS being 32-bit does not help: a 64-bit version is in the works and perhaps this will reach RasPad eventually.

Despite the solid build quality there are a few glitches. The auto-rotate works well, but the on-screen volume and brightness bars ignore this, so if you have the RasPad sitting vertically, they are upside down, for example.

The speakers are basic and sound tinny. The cable on the power block is annoyingly short. The power button seems temperamental; it suspends the OS but resume sometimes fails.

Another issue is that having a GUI on a tablet encourages you to think of the OS as a desktop operating system, but while it does work in this role, even on Pi 4 it is slow for modern GUI applications. Using a fast SD card helps somewhat.

We found the wedge shape somewhat troublesome. At a desk, you can choose between laying the RasPad on its back and having a very shallow angle on the screen, or sitting it upright and having it nearly vertical. An adjustable stand would have helped us find a comfortable angle.

Does it have purpose?

There are a few ways to look at the RasPad. For those looking to provide or prototype a Pi-driven touch screen for some project or other, this is a reasonable approach at modest cost. There is an official 7-inch touchscreen for the Pi but RasPad is 10.1" with 10-point multitouch, complete with case and power supply.

The stated purpose of RasPad though is for projects and learning to code. Again, this could make sense if you can make use of the rich range of sensors and add-ons that are available for the Pi, though the wedge-shaped case could be an annoyance for add-ons that sit on top of the Pi. Coding on the RasPad is possible but it is not ideal as a development box; a Chromebook or laptop would be less interesting but more practical. 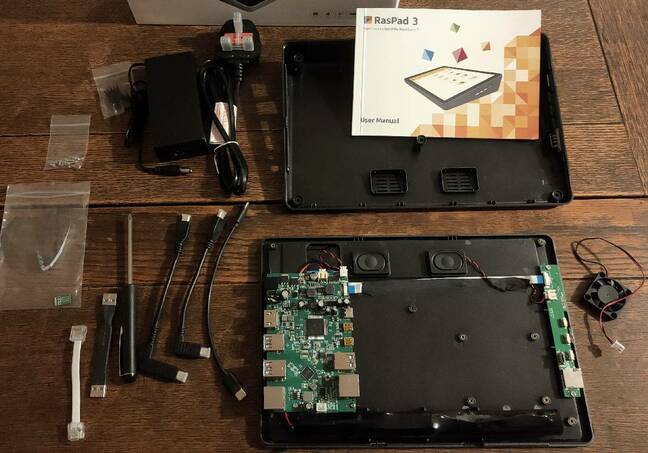 Some assembly required ... The RasPad in pieces. Click to enlarge

You can also consider the RasPad as a way of transforming a Pi into an all-in-one general purpose computer, with screen included. The advantage is that it is small and portable; the snag is that the screen is small and the touch-screen not that useful for day to day work on an operating system where most of the applications are not designed with touch control in mind. The RasPad does have an HDMI port so there is no problem hooking it up to a conventional desktop display.

What does a RasPad 3.0 cost? Right now, SunFounder says: "Sign up to Get the Exclusive Super Early Bird Price with $149. Save $150!" We have asked for more details of availability but have yet to hear. At that sort of money with a Pi 4.0 included, it seems good value; at $299 not so much.

It is also worth having a browse though the KickStarter comments from the original crowdfunded launch, giving a mixed picture of the company’s long-term support. One user complains about lack of precision in the touch screen, yielding this response from Sunfounder (note this relates to the original RasPad, not RasPad 3.0):

“Actually, the reason why inaccurate of touchscreen is that compatibility between system and screen is not good. Currently, Raspberry Pi is designed by Linux system that is worse than Windows system on user experience.”

We think the point being made is that investment in touch support for operating systems like Windows, Android and iOS is much greater than for Linux and Raspberry Pi.

RasPad 3.0 is fun to try but be prepared for some quirks – and hope that a fix is found soon for the noisy fan. ®

Sunfounder eventually got back to us to say: “We are now finding a way to minimize the noise of the fan while keeping the heat dissipation, and will let you know the solution when we figure it out.”

The company also confirmed that RasPad OS is NOT open source, and said the price of RasPad 3 will be confirmed when a new Kickstarter campaign is started.