Chocolate Factory pitches 'App Modernization' tech at devs, though what added value it brings is foggy

It is week seven of Google's OnAir videogasm and that means – if anyone is still paying attention – the latest topic is application modernization, which in Googleland is code for (you guessed it) running your stuff in containers, preferably via the bundle of services it calls Anthos.

The cloud giant took the OnAir opportunity to introduce several new Anthos features. These include:

But what is Anthos? The word means "wild flower" in Greek, and if that seems an opaque way to describe a subscription bundle, it is doing its job. From a billing perspective, it is something you currently pay $9.00 per vCPU for pay-as-you-go, or $6.00 per vCPU with a committed subscription, unless it is on-premises where the cost leaps to $75.00 or $50.00 respectively. For your money you get the features listed here, which differ depending whether you are on-premises, on AWS, on Google Cloud, or using the new attached clusters.

Still confused? You could dive into this technical overview and try to make sense of the current diagram, showing Anthos as a complete platform with GKE providing the low-level infrastructure (except in the cases where it does not), and then on top of that the cluster management, service mesh, config and policy management, application deployment mechanisms, and at the top developers slogging away writing code. 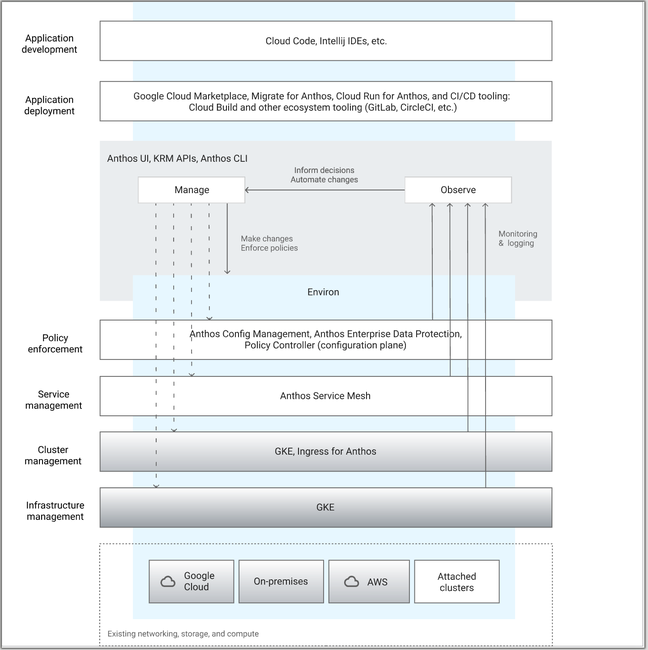 The big Anthos diagram: An effort by Google to show the various pieces in the service

Google has also come up with a paper called "Anthos under the hood", which is one of the company's better efforts at picking apart its wild flower. "Anthos runs on an infrastructure layer that's been abstracted, and applications that run on it have access to high-value services," we are told. Note that Cloud Run is a key part of the stack, and from a DevOps perspective Cloud Code, Cloud Build, and then Cloud Run is perhaps the ideal Anthos workflow.

The key question, perhaps, is what added value you get from Anthos over and above simply using the GCP services you require, including Cloud Code, Cloud Build, and Cloud Run. We think Google could do a better job of making this clear. ®