US electronics engineers and physicists have built micrometre-scale swimming robots that use a new type of actuator, forming the basis for a tiny automaton that could be injected into humans to perform minor medical procedures.

Powered by onboard silicon photovoltaics, the robots, which are less than 0.1mm in size, wriggle when stimulated by laser light. Built from common semiconductor material, one million of the tiny critters could be produced from a four-inch wafer, according to the author of a paper published in Nature.

Marc Miskin, assistant professor of electrical and systems engineering at the University of Pennsylvania, and his colleagues have described a device with miniscule "legs", or actuators, which fold and unfold in the presence of a faint electric current. The current causes ions (charged molecules) from a surrounding solution to adsorb to the actuator's surface, changing the stresses in the material and causing it to bend.

But speed and scale are not the breakthroughs here. Researchers have been building microscopic swimming "robots" for more than a decade by adding propulsion to microparticles controlled with magnetic fields. Although they might be smaller and faster than Miskin et al's system, adding sensors, batteries and onboard information processing has been a stumbling block.

The team approached the problem from the other direction. Instead of adding information processing to a particle robot, they added legs to silicon.

"The authors' actuators have great potential to be integrated with microelectronic circuits," said an accompanying article by Allan Brooks and Michael Strano from the Department of Chemical Engineering at Massachusetts Institute of Technology. "This is important, because future applications will require microrobots not only to swim on demand, but also to follow more-advanced instructions using inputs from onboard sensors and logic circuits." 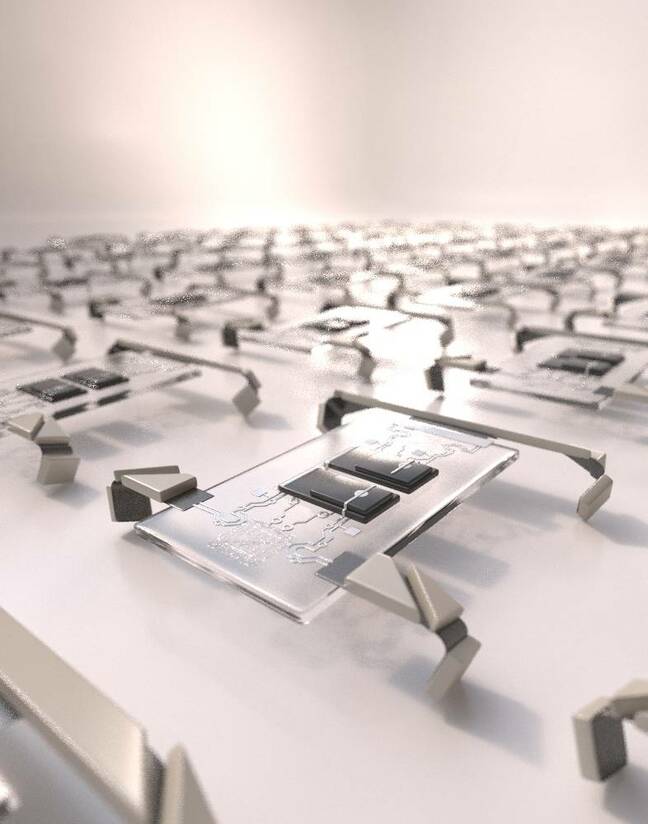 Miskin et al noted: "Piezoelectric actuators, while excellent for millimetre-scale robots, have not been scaled thin enough to operate at micrometre radii of curvature."

Although not autonomous in their current form, the robots could be seen as a platform to which "brains" and a battery could be attached. "Untethered, submillimetre-sized chips with sensors and integrated circuits are an active area of research, and so the hurdle of developing autonomous programmability for microrobots will soon be overcome," Brooks and Strano said.

The width of a human hair, the little devices would wind up in any number of applications as they can survive highly acidic environments and temperature variations of more than 200 Kelvin.

Although the group admitted there are limits to the current design, the paper explained that because they are compatible with standard semiconductor processing, they can quickly be developed to sense their environments.

"Such robots could autonomously explore a microenvironment or directly interact with biological systems using local sensory input and feedback."

What's more, they would be cheap. The group of researchers estimated a production cost of one US penny ($0.01) per device. ®