Don't worry, there are some useful features in the update too

Microsoft has bequeathed new capabilities to both the released and the preview versions of Windows Terminal, a feature-laden alternative to the command prompt.

It's the features that now appear in the released version that are most interesting. Windows Terminal – as found in the Microsoft Store – has reached version 1.2, with enhancements including focus mode, always on top, command palette and more. The preview version has been bumped to 1.3 with a new tab switcher, tab search, and some other tweaks.

By default the Terminal offers much more than the old command prompt. Multiple tabs is the most obvious feature, and a drop-down menu lets you choose between profiles by default command shell, PowerShell, WSL (Windows Subsystem for Linux), and Azure Cloud Shell (this list is configurable).

Getting the best from the Terminal does require a bit of work, though, and it remains a largely hidden feature of Windows 10. Some of the features are documented as "not bound by default", which means there is no keyboard shortcut for them: you can find them using the command palette, but this too is off by default in the current release. 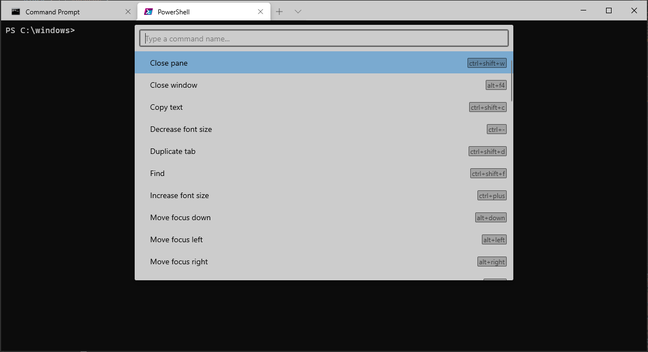 Another catch is that if you have been using Windows Terminal for a while, the settings file will be based on an old version. A handy tip is to open settings from the drop-down menu then open settings again with the Alt key held down. This shows the latest default settings in your default JSON editor. These settings do not overwrite the current ones, but you can then copy and paste selected parts, or the whole thing if you want to start from scratch. Microsoft is planning a GUI settings applet for Windows Settings, which will help to make the Terminal more discoverable, though some users may still prefer editing the JSON directly.

Command Palette is in version 1.2 and enhanced in 1.3. Enable it in 1.2 by adding the following to the "actions" section of settings.json:

Then press the key combination, and up comes a searchable list of commands in a style familiar to users of Visual Studio Code. Use the arrow keys to select a command and press Enter. These commands control the appearance and behaviour of the Terminal itself, such as changing the font size or duplicating a tab. Users can also amuse themselves with options like "Toggle retro terminal effect", which "will emulate a classic CRT display with scan lines and blurry text edges. This is an experimental feature and its continued existence is not guaranteed," state the docs. In version 1.3 the Command Palette is enabled by default, and there is a command line mode that lets you run wt commands on the current window (wt being the executable that runs the Terminal). 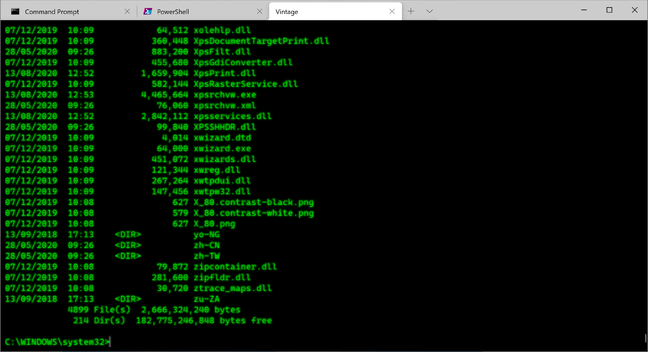 Always-on-top mode does what you expect, pushing the Terminal in front of all other windows – annoying in normal use but could be handy in some troubleshooting scenarios.

Focus mode, which again is "not bound by default", hides the tabs and title bar. Maximise the Terminal, hide the taskbar, and enter focus mode for an immersive command line experience. Add retro mode and travel back in time.

The Windows Terminal in conjunction with WSL is a great enhancement to Windows 10 for those who enjoy the speed and scripting capabilities of the command line and the new command palette is a useful improvement. ®