Amazon has teased a smartphone app and wireless wristband that employ sensors and machine-learning algorithms to depict how fat you'll get unless you do some exercise – and tell you to relax if you sound stressed. All for your own good, of course.

Unlike other smartwatches or fitness trackers, this wearable does not have a screen. You won’t be able to tell the time with it nor display your phone’s notifications. Though, as expected of a fitness wearable, it packs sensors that detect movement, temperature, and heart rate, as well as two microphones.

The accompanying app connects to the wristband and acts as a central hub to view, analyze, and store all the data collected by the gadget to show how healthy or otherwise you are, and whether you sound stressed or relaxed or happy or sad to others. It can count your steps taken, monitor your sleep, tell you how intense your workout was, and so on.

Neural networks in the cloud can determine from your phone camera photos, uploaded via the app, how much fat and muscle is in your body, even going as far as generating a 3D model predicting what your body will look like if you lose or gain weight. You have to wear "tight, minimal clothing – think a sports bra and bike shorts for women; boxers or briefs for men," in your submitted photos for this feature to work, says Amazon. Now that's motivating. 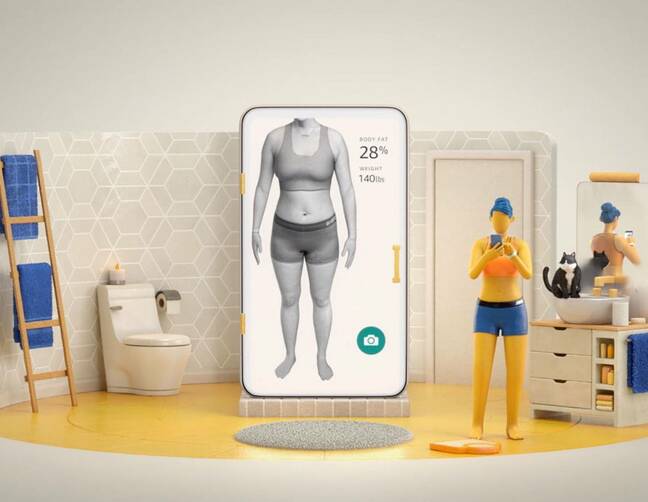 We know your shopping habits, your cloud use, and now your body ... An illustration of the body-predicting app's user interface. Source: Amazon

Amazon on Thursday claimed it tested this body-modeling code using data sets of people's “dual-energy X-ray absorptiometry” measurements – a process that estimates the mass of soft tissue in bodies by detecting the absorption of X-rays. The tech giant declined to tell us the actual accuracy of its software, however, and just said it was as good as anything “a doctor would use.”

The app uses three deep neural nets running on backend servers to create the 3D thick or thin model of you, which can be adjusted by sliding an on-screen widget. The first network identifies and extracts your body from photos taken of you by your phone's camera; the second network estimates your fat and muscle content from the shapes of your identified body parts; and the third brings this all together to predict and visualize your body at different weights.

The whole shebang is marketed under the brand Amazon Halo: users will eventually pay a $3.99 monthly subscription service to access top-end features of the $99.99 Amazon Halo Band, accessed via the Amazon Halo app. For now it's available only by requesting early access to the service. If accepted, you’ll receive the Halo Band and six months of membership for $64.99. And that’s only if you’re in the US.

An Amazon spokesperson told El Reg it had “nothing to share at this time” when we asked when the service would be generally available.

The other AI-powered feature of the Halo app is Tone. Users can opt-in or out of allowing the Halo Band to automatically listen to how you talk throughout the day. Speech processing algorithms will recognize your voice from other people’s, and it listens out for the “pitch, intensity, tempo, and rhythm” to assess how you sound to your friends and family. The idea is you change the way you talk so you don't annoy or upset those around you.

It's all in the wrist: Your fitness tracker could be as much about data warfare as your welfare

Amazon described Tone as a way to “analyze energy and positivity in a customer’s voice so they can better understand how they may sound to others, helping improve their communication and relationships.” If you lack self-awareness, this one might be for you.

For those of you concerned about your privacy, Amazon said the body scans are generated in the cloud – which means sending snaps of you half naked to its computers for processing. "Your body scan images are automatically deleted from the cloud after processing," it added. "After that, the images and resulting personalized 3D body model are only stored locally on your phone."

Note that if you enable the cloud backup feature, your data will obviously be backed up and stored in the cloud. There's no mention in the privacy policy of Halo data being used to train or improve other services offered by Amazon.

Tone requires less computation, so all the number crunching is performed on your smartphone. Recordings of you nattering away “never get sent to the cloud, and can’t even be played back or downloaded, so no one ever hears them,” Amazon said. Data transferred from the Halo Band to the Halo app or from the app to the cloud is encrypted. ®