'The future's going to be weird' says startup's founder Elon

Video In a late Friday evening reveal, Elon Musk updated the world on his Neuralink brain-to-computer interface startup, with the help of three little piggies. Specifically, his team revealed it has implanted a mind-reading gadget in a live pig's brain.

The porcine test subjects were: a control animal; one who has had the implant in place for a couple of months; and another who had had one removed and looked healthy, presumably to reassure people who want to eventually wire a Neuralink gadget into their gray matter that the process is reversible.

As Gertrude, the pig with the coin-sized implant, walked around, ate things, broke wind, and did other things pigs do, what was said to be her brain activity appeared on a screen, revealing real-time neural network signals observed by Neuralink's embedded tech.

Musk said the implants have been performing well, and his eventual goal was to build human implants that would enable the sharing of memories, telepathic summoning of Tesla cars, hands-free gaming, and so on. Let's hope it works better than Tesla's self-driving systems.

Essentially, the plan is: you think a command, it's detected as electrical signals by the Neuralink electronics fitted in your brain, and then wirelessly passed to a computer or some other device to interpret and obey. The system could also read your mind, help you overcome brain injuries, etc.

"You could store your memory as a backup and restore the memories or download them into a new body or a robot body. The future's going to be weird," Musk said in a web broadcast, embedded below. He added it was like having a "Fitbit in your skull."

Version two of Neuralink's automated implant installer was also shown off at the event, a system that can install the mind-reading widget's 1,024 five-micron-wide electrodes 43 millimetres into the brain to scan for electrical activity. The surgery robot, seen below, was designed by an outfit called Woke Studios for Neuralink, and it's hoped that the Neuralink "Link" can be embedded in your head without the need for general anesthetic.

As the device design improves, the team wants to go deeper, if it's safe, to increase the sophistication of the tech. 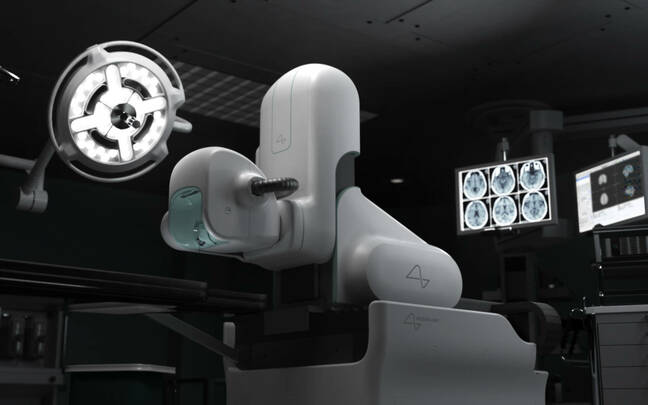 The robot designed to surgically implant the device into brains ... Source: Woke Studios. Click to enlarge

"The first builds are going to be quite expensive but that price will rapidly drop," Musk promised. "Inclusive of surgery the cost will come down to a few thousand dollars, the same as Lasik surgery."

He said spoken words have a very slow data rate, and speech is so very poor at communicating compared to analyzing and interpreting raw electrical data straight from the brain. Thus, if we can communicate uncompressed thoughts at high speed to others wirelessly, this would bring about something close to telepathy. Senses could also be expanded using hardware, to give "super vision," he suggested.

The inclusion of pigs raised some questions. Musk explained that pigs are a good substitute for humans, with a similar dura membrane and skull shape, and will have to do until trials can begin on humanity. "It's easy to keep pigs happy, they love food, it's a true thing about pigs," he said. "Give them some food and some friends and they're happy. Pigs are quite similar to people."

Other animals have been tested with the Neuralink tech, we're told, with roughly nine in ten implantations succeeding.

The initial focus of the four-year-old company, largely funded by Musk, is to help people with disabilities regain some control of their bodies, the billionaire said. What's the betting we'll see this actually working in the field before or after the arrival of power-generating fusion reactors, viable quantum computers, or faster-than-light travel? ®

Promises restoration of suspended accounts, despite previous pledge to do no such thing
Security25 Nov 2022 | 442

But why Elon Musk's satellite broadband biz and not govt-funded OneWeb?
Networks1 Dec 2022 | 24