Samsung has flicked the 'on' switch for a new production line at its Pyeongtaek facility and set it to work cranking out what it says is the first 16-gigabit (Gb) LPDDR5 mobile DRAM module.

“The Data-Copy command instructs the LPDDR5 device to copy data transmitted on a single I/O pin to the other I/O pins, eliminating the need to transmit data to the other pins. The Write-X command instructs the device to write all-ones or all-zeros to a specific address, eliminating the need to send data from the SoC to the LPDDR5 device. Reducing data transmission with these new commands will help reduce overall system power consumption.”

Sammy reckons it’s done all of that and managed to make its 16Gb package 30 percent thinner than its 12Gb predecessor. 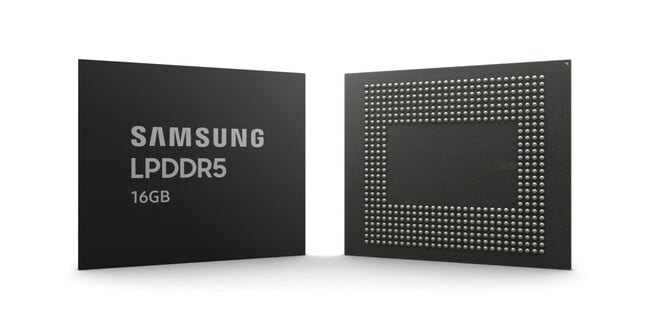 The Korean giant says the first lot of this new RAM will be used to “strengthen its presence in the flagship mobile device market throughout 2021.” Which suggests 16GB could become standard in next year’s high-end Galaxy models, and perhaps those offered by rivals.

The company’s announcement also says Samsung will “expand the use of its LPDDR5 offerings into automotive applications, offering an extended temperature range to meet strict safety and reliability standards in extreme environments.”

To get it all built, Samsung is using its biggest-ever silicon-baking-barn. The new Pyeongtaek Line 2 occupies 128,900 square meters, which the company says is equivalent to about 16 soccer fields. The facility will also make DRAM, next-generation V-NAND and offer foundry services. ®