Sounds like the black helicopters have come for us. Oh, just another swarm of FAA-approved Amazon delivery drones

Imagine everyone placing 30-minute orders for stuff all day. In fact, let's turn to those who have lived under it

Amazon has won approval to deliver packages by drone across the United States, meaning that customers could soon receive lightweight orders within 30 minutes but at a cost: drone delivery bots soaring overhead.

On Monday, the Federal Aviation Administration (FAA) gave the e-commerce giant the right to carry property on drones “beyond the visual line of sight” of the operator, meaning that it is able to deliver packages under five pounds in weight to anywhere it offers the service.

Amazon is actually the third organization to receive approval following UPS and Google’s Project Wing late last year, and there are another three applicants under review, according to the FAA, though Amazon is expected to be most aggressive when it comes to rolling out coverage given its sharp consumer focus. 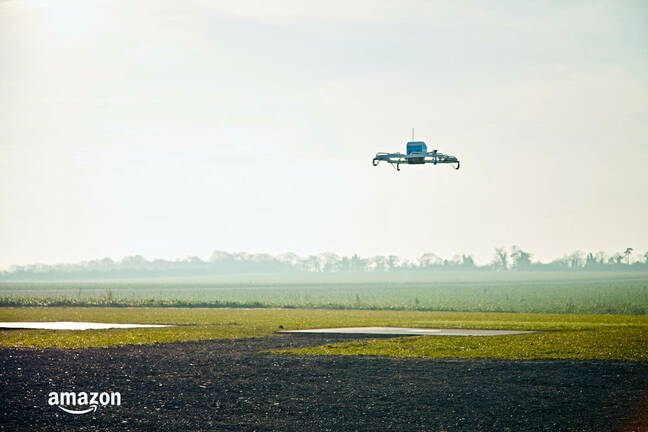 Coming soon to a skyline near you. Click to enlarge. Source: Amazon

The web titan hasn’t given an expected launch date but its veep of its “Prime Air” program, David Carbon, said it will “continue to develop and refine our technology to fully integrate delivery drones into the airspace, and work closely with the FAA and other regulators around the world to realize our vision of 30 minute delivery.”

Amazon has carried out various trials across the US, Australia, and the UK. It is expected to deploy the service proper first in suburban areas in America's Pacific Northwest, close to its home base of Seattle.

At the same time, another US government agency, the Federal Communications Commission (FCC) released a report by telecoms experts identifying a specific radio spectrum range (5030-5091 MHz) for use by drones, known officially as “unmanned aircraft systems," or UASes.

“The report finds that the 5030-5091 MHz band is suitable for such operations and recommends that the commission begin a rulemaking to develop service and licensing rules enabling UAS use of that band,” the regulator noted while also warning that a second band (960-1164 MHz) could be problematic.

While the FCC is figuring out the technical requirements, the FAA is focused on safety, and potential delivery companies are talking about how incredibly convenient drones and 30-minute deliveries will be. What has yet to be fully discussed is the irritation factor.

In one notable trial run by Google in Bonython, Australia, a suburb of Canberra, hated the drones so much that residents organized together to run them out of town. While acknowledging it was very convenient to have super-fast deliveries to their homes, locals said the noise drove them, their dogs and local wildlife crazy.

Described as extremely loud, the drones operated from early morning to evening, locals complained, and could be heard from inside closed houses, even those with double-glazing. Houses are rarely designed to exclude sound from above and so residents were driven to the point of tears by the incessant whining.

Aussies complained that their quality of life was being "severely disrupted” and they were suffering "distress and sheer anger about the constant noise." They also reported a massive drop in the wildlife around the flight paths and dogs going crazy whenever a drone flew over them. Google dropped the trial in Bonython but not before opening up new trials in Australia and the US.

Meanwhile, autonomous flying machines are rapidly moving toward reality with the news late last week that Reliable Robotics had managed to ramp up to a full-sized plane: an unmanned four passenger Cessna 172 Skyhawk automatically taxied, took off, and landed.

And it carried out a fully automated remote landing on an even larger plane, the Cessna 208 Caravan (C208), which can carry 14 passengers. “By bringing advanced automation to aviation, we will deliver higher safety, reliability and convenience for cargo operators and eventually for passengers," said its CEO Robert Rose.

It’s amazing technology but you can’t help but wonder whether the convenience of super-fast deliveries is worth the constant noise, or what society will make of the first autonomous plane crash. ®