Bork!Bork!Bork! Summer time, and the borking is easy. Particularly if you're a Windows 10 IoT-powered ticket machine in Dublin.

Spotted by an eagled-eyed Register reader, this Irish Rail machine is, in a very real sense, flashing its undergarments for all to see. It has revealed that lurking beneath the sheen of the usually byzantine range of ticketing options familiar to travellers lies the equally byzantine world of Windows 10.

Our reader reckons they befuddled the poor thing by popping their student card in upside down (as well as attempting to use it outside of the college semester).

Windows reacted with all the stability of blancmange flung from a carriage window and popped up a dialog requesting administration credentials before moving on to the defrocking shown here. 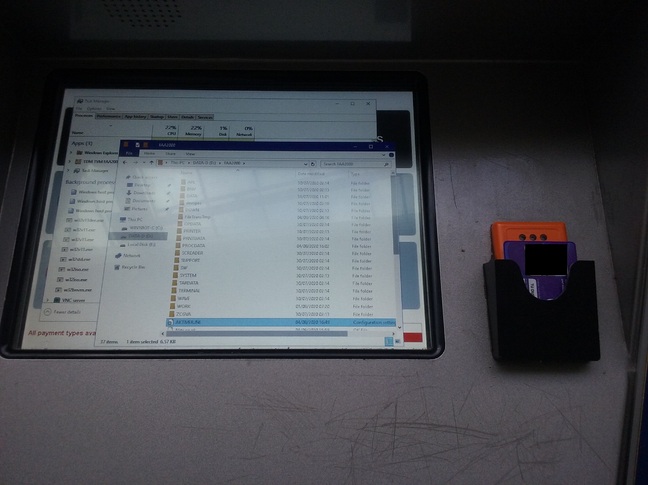 "There was a crowd that day, and I was trying not to touch public screens any more than necessary," our reader explained.

Good advice; nobody likes a screen-licker.

However, it did mean that they did not jab the folders on display in the hope of delving further into the poor thing's internals and the content of SCREADER, PROCDATA and TARDATA will forever remain a mystery.

Still, it is good to see Windows 10 IoT getting an airing rather than some of the slightly whiffier editions of the OS that grace these pages. Although what is hoovering up all that CPU is up for discussion. Windows Explorer is notable for chowing down on the cycles, or perhaps the sheer effort of relieving passengers of their hard-earned readies is just too much for the hardware?

Those planning a jaunt aboard Ireland's finest will be relieved to know that whatever borkage had been visited upon the ticketing terminals has now been resolved, thanks to the awe and splendour of Windows 10 IoT's remote management smarts. Or perhaps just a lack of student card holders poking their plastic where it doesn't belong.

Spotted Windows looking terminal, or a user interface misbehaving in a public place? Submit your sightings of technical slip-ups to the Borkdesk. ®