So brave... but not so Brave

Google Chrome is making good on its promise to block so-called "heavy ads" – web adverts that hog the network, drain batteries, or slow down your device by chewing up too much processor time.

Announced back in May, the initiative aims to help protect those using Google Chrome on desktop computers and Android handhelds from abusive experiences, which in this context refers to ads that demand excessive computation, bandwidth, or power. Such banners will be blocked with the words "Ad removed," as seen below. 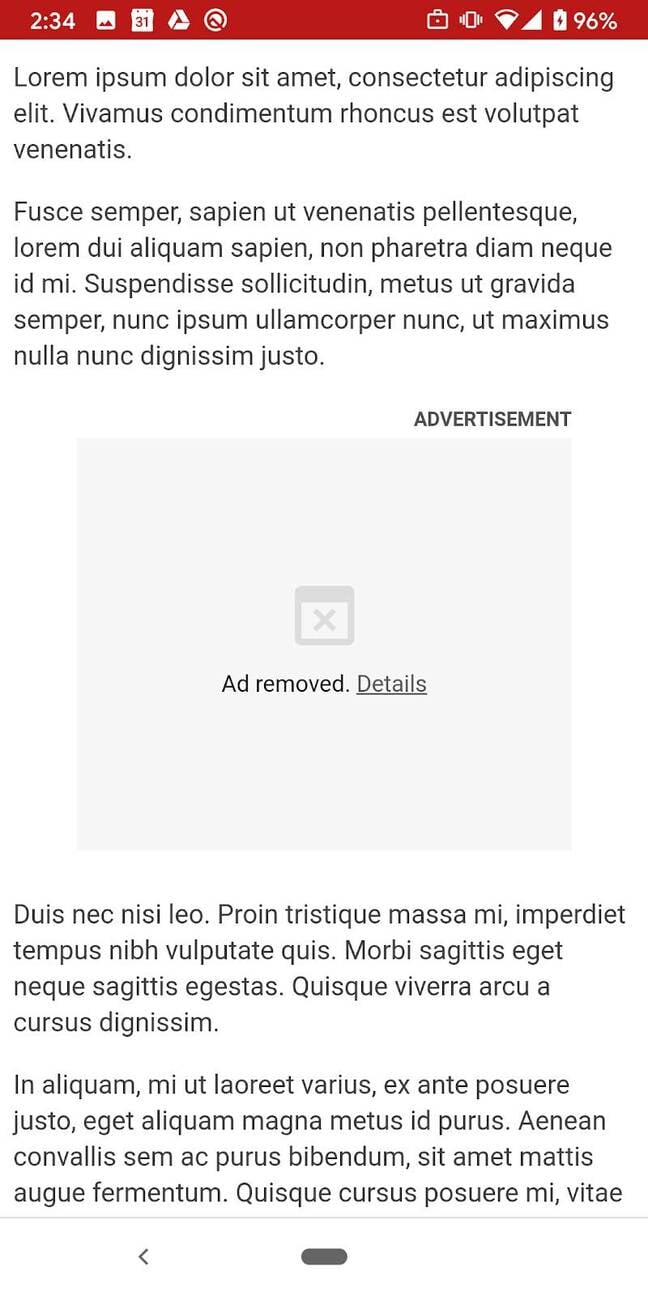 On Tuesday, Google software engineer John Delaney said the heavy ads intervention – previously hidden unless activated by a browser flag – will be made available gradually throughout the month of September in Chrome 85, released last week.

In a GitHub repo document, he explained that a small number of ads use an immoderate amount of system resources. "These poorly performant ads (whether intentional or not) harm the user’s browsing experience by making pages slow, draining device battery, and consuming mobile data (for those without unlimited plans)," he said.

Henceforth, for those using versions of Chrome on Windows, Mac, Linux, Chrome OS, and Android, that have received the activation signal, overly demanding ads will be unceremoniously dumped. There's one exception – Android apps implementing a WebView object to present web content outside a browser won't intervene because Chrome Ad Tagging doesn't work in WebViews. And presumably iOS Chrome isn't included because it uses Apple's WebKit engine rather than Google's Blink.

Google said an ad is considered "heavy" if a user has not interacted with it and it meets any of the following criteria:

These criteria are intended to catch, for example, ads that mine cryptocurrency or conduct other computationally expensive JavaScript operations like timing attacks, ads that load large, uncompressed images, and ads that load large videos without user consent.

Google's ad slimming regime won't catch too many, though: according to Delaney, only the heaviest 0.3 percent of advertisements encountered in Chrome will be sidelined. But that's still expected to lead to a 20 per cent reduction in ad resource usage, based on test data.

The internet advertising giant's number crunching also suggests some false positives and site breakage should be expected, though not so much anyone should be concerned.

"We have been working with sites to resolve these issues, but due to the rarity of the intervention, these are not considered high impact," Delany wrote in the Blink developer forum post. "The intervention is present on 0.18 per cent of page loads. The expected number of interventions which break the page are a small fraction of that (based on bug reports and spot checks)."

Even so, that's likely to add up to a fair number of malfunctioning sites as heavy ad intervention rolls out, given that Chrome has about 65 per cent of the global browser market and that there are more than 223bn monthly visits just to the top 100 websites globally, as per data from SimilarWeb.

There's also a minor privacy issue created by ditching heavy ads: unloading behavior can be observed by websites, so it's possible to make inferences about system information by serving test ads and noting the response. Google has implemented a fuzzing mechanism, which can be disabled with a flag change, to make such readings less predictable.

Web publishers can use the Reporting API to receive notifications when ads on their sites get binned.

Google, after being urged to so do, has decided to submit its approach for possible standardization. ®