The Moon’s surface is peppered with flecks of rust, according to research published on Wednesday.

It’s a surprising discovery considering the natural satellite contains no free oxygen, which is needed to oxidize iron to make rust. Yet data from the Moon Mineralogy Mapper (M3), a NASA-designed instrument onboard the Chandrayaan-1, the first lunar spacecraft from the Indian Space Research Organisation, has pointed out deposits of hematite, a type of iron oxide, dotted around the Moon.

"When I examined the M3 data at the polar regions, I found some spectral features and patterns are different from those we see at the lower latitudes or the Apollo samples," said Shuai Li, lead author of the study published in Science Advances and a researcher at the University of Hawaii’s Institute of Geophysics and Planetology.

"I was curious whether it is possible that there are water-rock reactions on the Moon. After months of investigation, I figured out I was seeing the signature of hematite." This common form of iron oxide is found on both Earth and Mars. 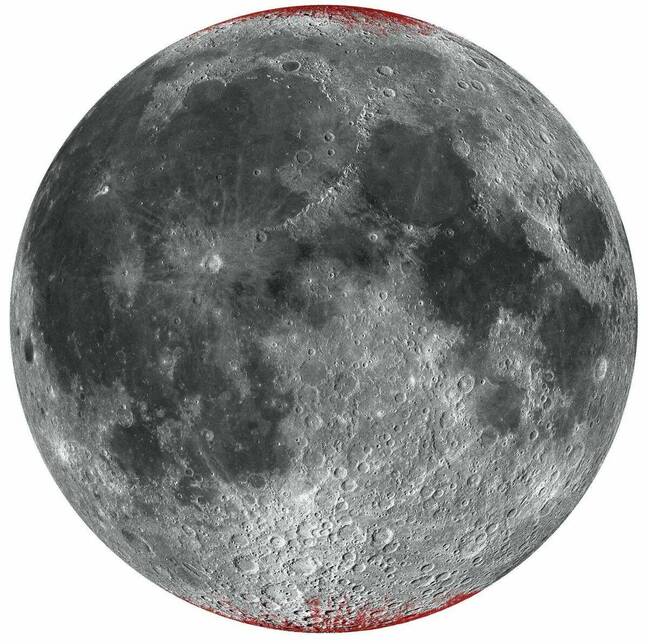 That'll clean right off ... Map of hematite, in red, on the Moon using a spheric projection, nearside only.
Credit: Shuai Li. Source. Click to enlarge

Although lunar regolith does contain oxygen, all of it is locked up within minerals and it’s not available to readily react with iron. Instead, the Moon is apparently getting its fresh oxygen supplies from its nearest neighbor: Earth.

Li and his colleagues reckon that the gas from our planet’s upper atmosphere may be carried by the solar wind and blown onto the satellite’s surface.

“It turns out that the total oxygen delivered to the Moon from Earth in 100 million years is sufficient to generate the hematite we see,” Li told The Register on Wednesday. “The total oxygen is estimated from the observation by Japan’s Kaguya mission. They observed that 1.5x1027 oxygen particles can be delivered to the lunar surface annually.”

There is tantalizing evidence that Earth is, indeed, imparting its oxygen to the Moon. Firstly, the most concentrated spots of hematite are found at high latitudes on the side that always faces the Earth. Secondly, Japan’s Aerospace Exploration Agency's Kaguya spacecraft previously found that it was possible that oxygen was transported from Earth to the Moon by a wind of plasma carried by the planet’s magnetic tail.

Whenever it’s a full Moon, the orbit brings the natural satellite within Earth’s magnetotail where it is shielded from the solar wind but blasted with ions from our planet’s magnetic field. It is during these times that the Moon may be collecting oxygen to create rust.

Impacts from dust particles could also release water molecules in the Moon's surface, usually deposited at the satellite's polar regions, and mix with the iron. The heat from the collisions might also increase the rate that the iron is oxidised.

“Interestingly, hematite is not absolutely absent from the far-side of the Moon where Earth's oxygen may have never reached, although much fewer exposures were seen," said Li. "The tiny amount of water observed at lunar high latitudes may have been substantially involved in the hematite formation process on the lunar far-side.”

It’s not the first time that hematite and other types of iron oxides have been discovered on the Moon. Lunar regolith brought back from Apollo missions also found traces of rust, though some scientists at the time thought the minerals may have been the result of contamination on Earth.

The team will have to wait for NASA’s Artemis mission to analyze new lunar samples to see whether their hypothesis is correct. If they’re right, the Moon may have preserved oxygen isotopes from Earth’s atmosphere for billions of years.

"I think these results indicate that there are more complex chemical processes happening in our solar system than have been previously recognized," said Vivan Sun, co-author of the study and a scientist at NASA's Jet Propulsion Laboratory. "We can understand them better by sending future missions to the Moon to test these hypotheses." ®