Video Engineers have overhauled the classic handheld 8-bit Game Boy to include solar panels on the front and an internal electromagnetic coil to generate electrical energy from button presses. Not so much batteries not included as batteries not needed.

Unfortunately, the console is not for sale and it’s not officially affiliated with Nintendo. Instead, it’s a research project that seems to be intended as some sort of a metaphorical middle finger to modern IoT gizmos.

“Our work is the antithesis of the Internet of Things, which has many devices with batteries in them,” said Josiah Hester, an assistant professor at Northwestern University’s McCormick School of Engineering and Applied Science in the US.

“Those batteries eventually end up in the garbage. If they aren’t fully discharged, they can become hazardous. They are hard to recycle. We want to build devices that are more sustainable and can last for decades.” 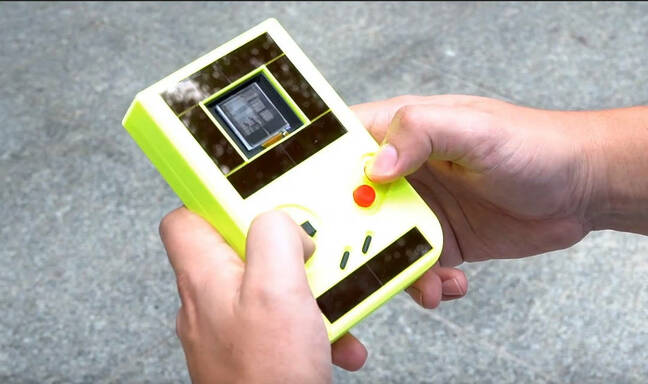 Hester, along with folks at Delft University of Technology (TU Delft) in the Netherlands, decided to craft a machine capable of playing Game Boy cartridges using an emulator without relying on any batteries at all. Strips of solar panels on the front of their blocky gadget convert sunlight to electrical energy as the user plays a game. Solar power is not enough, however, and there’s a second mechanism that produces electricity whenever a button is pushed.

Here’s a video of the battery-free Game Boy in action:

“The buttons generate energy by moving a magnet inside a coil,” Hester explained to El Reg. “When you press the button it moves the magnet through the coil, this energy is then siphoned into a capacitor for immediate use by the Game Boy.”

In other words, in the process of playing the Game Boy the user creates some energy to keep the console going. Games that involve more button-mashing, like Tetris or Super Mario, therefore, generate more energy than slower games like Chess.

Although it’s possible that the battery-free Game Boy could run forever, in practice it doesn’t really work out that way. Playing a game is a constant battle between energy generation and consumption.

When the balance skews too much toward consumption, the Game Boy simply just turns off, and when it gets enough energy it comes back to life – all in a matter of seconds depending on the amount of sunlight available. Thankfully, the researchers figured out how to snapshot the state of the machine and save it to non-volatile memory in time when the supply runs low, and restore from it from memory when the power returns. Thus players can just continue where they left off... if they can put up. With the. Game pausing. Occasionally.

“With good sunlight, like a sunny day in Chicago at noon, and a few button presses every second – for instance, to turn a Tetris block – the Game Boy can stay continuously powered since it is harvesting enough energy to power all operations,” Hester told us.

"However, if you don't have great Sun, or the game you are playing does not require a lot of button presses – for example some slower games like Chess – we have noticed about ten seconds of play then one second of waiting for enough energy to turn back on

“The energy the device gathers is used almost immediately by the Game Boy. So, if you turned the lights off, the Game Boy would lose power quite quickly. The energy is stored in a small intermediate capacitor, which is basically two metal plates that hold a charge between them. Our particular capacitor is smaller than a grain of rice."

The device is more of a proof-of-concept that the idea of “sustainable gaming,” where consoles are powered by green energy, will one day be possible.

“Sustainable gaming will become a reality, and we made a major step in that direction — by getting rid of the battery completely,” said Przemyslaw Pawelczak, who co-led the research and is an assistant professor at the TU Delft’s Embedded Software Lab. “With our platform, we want to make a statement that it is possible to make a sustainable gaming system that brings fun and joy to the user.”

A paper detailing the design of the gizmo is due to go public on September 10. ®