Microsoft has dropped a beta of Expressive Pixels, a delightfully retro editor aimed at flinging animated visuals at LED displays.

Designed for nonverbal communication, the software has both the worthy goal of improving accessibility as well as being an amusing toy. Microsoft suggested the following scenario: "You're sitting at your PC, at home, working remotely. You've got a partner who is doing the same.

"Without requiring you to even turn around, an LED display visible to anyone near you lights up an emoji: a stop sign.

"Now your household knows you're busy for the moment, without you having to say a word."

To be frank, we could think of several far more amusing things to fling up on a LED panel near one's desk, and a stop sign is not one of them. 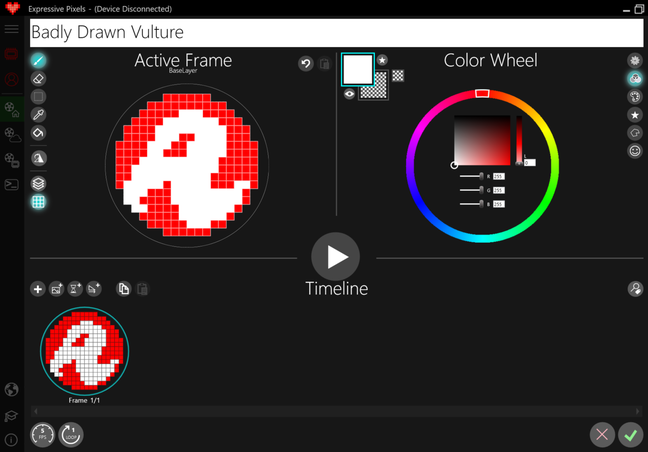 Then again, this hack's humour arguably stopped developing at around 13 years and the urge to use the editor to create less savoury imagery than a heart or flower is overwhelming.

We took the beta for a spin and found ourselves confronted with something that resembled an animated icon editor from decades past. Up to a 64 x 64 icon can be created and then animated in an interface that cheerfully ignores much of Microsoft's UI design guidelines. Emojis and examples culled from the community (hosted in Azure, of course) can be transformed into pixelated representations.

It felt reminiscent of years spent designing sprites for TI99/4a games back in the 1980s, and it was certainly amusing to rediscover muscle memory gained from animating 16 x 16 characters, even if the selection of colours available in modern times is considerably wider than Texas Instruments' sort-of 16.

The static or animated images can then be sent to a connected LED display – such as those from Adafruit, Sparkfun or SiliconSquared – or left on the PC. Alternatively, your efforts can be spat out as an animated GIF.

While Microsoft rightly highlights the benefits Expressive Pixels can bring to those with a speech-related disability, it is also undeniably a fun thing to play with.

If you'll excuse us, we're just off to create a pixel vulture biting the hand that feeds IT. ®