Updated A hacker has peered into a fancy digital pregnancy stick and found it is just a glorified analogue paper test strip with a screen added, a novel form of activation, and a larger price tag.

Inspired by an earlier Twitter thread, hardware hacker (and floppy disc enthusiast) foone bought a pack of two digital pregnancy sticks for $7, whereas a pack of 25 paper-based ones costs about $9. Foone decided to pry into one of the sticks, and discovered it contained an 8-bit Holtek HT48C06 microcontroller with 64 bytes of RAM and 1024 words of ROM, a series of LED lights, photosensors, a cell battery, and a small rectangular screen.

The microcontroller onboard makes it seem fairly advanced, but at the core of is, well, one of those cheap paper tests.

And check it out: this paper strip has a line on it... this is a pregnancy test strip, isn't it? pic.twitter.com/eEDHRzSyY7

None of the hardware or software is used to directly detect if someone is pregnant or not. That job is for the paper, which looks for human chorionic gonadotropin, a type of hormone secreted during the early stages of pregnancy, in urine.

Amazing peer-reviewed AI bots that predict premature births were too good to be true: Flawed testing bumped accuracy from 50% to 90%+

The whole device is activated when the strip is moistened. The damp paper acts as a switch, connecting the stick's battery to the circuitry, and if the characteristic two lines show up, the aforementioned LED lights and photosensors spot this and the screen displays the results: pregnant, or not pregnant. In other words, the paper test is doing all the hard work; the electronics just read the visual results.

“I was kind of surprised as I figured it'd be integrated somehow, rather than having a separate test paper in it,” foone told The Register. “It seems if they were going to use standard test paper, they'd make it reusable by having you insert your own standard test strips, since those are so cheap.”

At first foone thought the gadgets were a “100 percent a marketing trick,” though now believes the digital sticks' benefits have only been "exaggerated somewhat.” As some Twitter users pointed out, in some cases the digital stick is perhaps a better option for those with impaired eyesight. The screen is easier to read than faint lines on paper.

You can solve all these problems with a simple LED and a photodetector.
It’s sensitive
It’s reproducible
It’s not biased
It can be used for quantitative analysis.

It obviously depending on how good the detector is. But usually is way better than naked eye.

Also, there's the issue of regulation and safety certification. “During the thread someone brought up that they have to be FDA certified, so it makes sense now. It's easier for [companies] to integrate an existing test strip rather than develop something new they'd have to get certified,” foone added.

The next stage of the project was to see if this could be beefed up a little. After adding a new processor and screen, foone turned the device into a gizmo that could display messages no one wants to see... ® 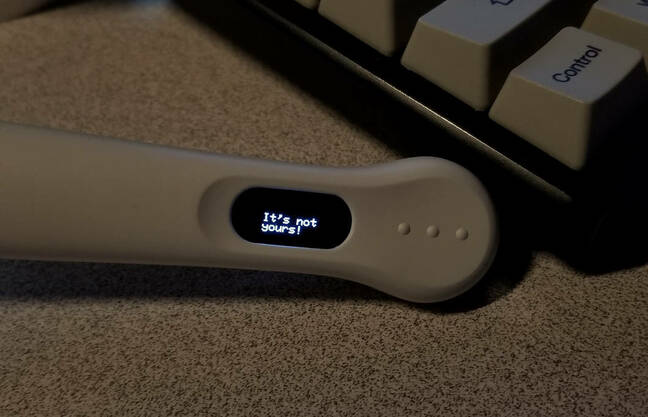 This is going to be an awkward chat. Click to enlarge

Scratch any hacker and you'll find an overachiever - foone now has a Doom game going in the pregnancy test stick.

Yesterday I had a lot of retweets and reddit posts and such for playing Doom on a pregnancy test.
But as I explained then, it wasn't really PLAYING on a pregnancy test, it was just a video being played back, not an interactive game.

Well, now it is. It's Pregnancy Test Doom! pic.twitter.com/Nrjyq07EVv