Something that doesn't involve viruses, politics and wildfires

Speckles of dirt kicked up from Bennu’s surface can stay suspended in space and sometimes they even orbit the asteroid, only to come crashing back down onto its equator, giving it its spinning-top or diamond-like shape.

The phenomenon was spotted last year. Scientists studying images of Bennu snapped by NASA’s OSIRIS-REx spacecraft discovered the asteroid was spitting out bits of debris. At first, these pinprick of material were mistaken for background stars.

“I was looking at the star patterns in these images and thought, 'huh, I don't remember that star cluster,'" said Carl Hergenrother, lead astronomer of the OSIRIS-REx mission and a research scientist at the University of Arizona. "I only noticed it because there were 200 dots of light where there should be about 10 stars. Other than that, it looked to be just a dense part of the sky."

The team continued to monitor the asteroid’s behavior to figure out how and why the asteroid was kicking up such a fuss. They discovered that solar radiation and meteoroid impacts dislodged particles from its surface. Bennu spins on its axis, quickly completing a full rotation once every 4.3 hours. As it turns, areas of its exterior are repeatedly heated by the sunlight and cooled.

The rocks on its surface continuously expand and contract, and over time they crack. Small bits break apart and are flung out as the asteroid spins. Collisions from space dust also frees up more material to be ejected. Most of these ejected blobs are tiny; the largest parts are about the size of a marble. 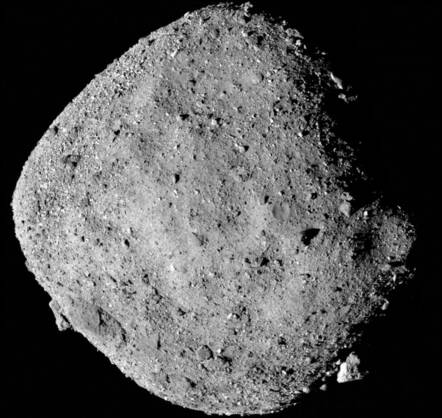 A snap of Bennu taken by OSIRIS-REx from a distance of 24km. Source: NASA/Goddard/University of Arizona. Click to enlarge

“Either, or both, of these processes could be driving the particle ejections, and because of the asteroid's microgravity environment, it doesn't take much energy to launch an object from Bennu's surface,” according to NASA on Wednesday. The warmth of the Sun’s rays sometimes pushes the spots of dirt along, preventing them from falling back onto Bennu.

“The particle gets really close to the surface and just misses,” said Jay McMahon, an assistant professor at University of Colorado Boulder, who leads the radio science team on the mission. “If it can do that a few times then it can get into a situation where it can live in orbit for quite a while.”

Eventually after a few hours, gravity takes over and the particles tumble back down onto the asteroid. They tend to fall on its equator, where Bennu bulges out, and explains why the rock is diamond-shaped. Material lost from its poles gradually accumulates at its center.

OSIRIS-REx is expected to extend its robotic arm to scrape and retrieve some asteroid dirt on October 20 this year. A series of papers describing the latest research on Bennu were published in the Journal of Geophysical Research: Planets earlier this year. ®