Canonical founder and CEO Mark Shuttleworth said yesterday that he will revive the defunct Community Council amid complaints that the volunteer Ubuntu community has been neglected.

In theory, the Ubuntu Community Council plays a key role in the governance of the project, setting the code of conduct, resolving disputes, and managing nominations and elections for other Ubuntu boards and councils.

It is meant to meet every two weeks on Internet Relay Chat. However, currently there is only one member – Mark Shuttleworth who, as the governance page also explains, is "self-appointed benevolent dictator for life" (SABDFL). The council has failed to hold elections for new members and has in effect become defunct. 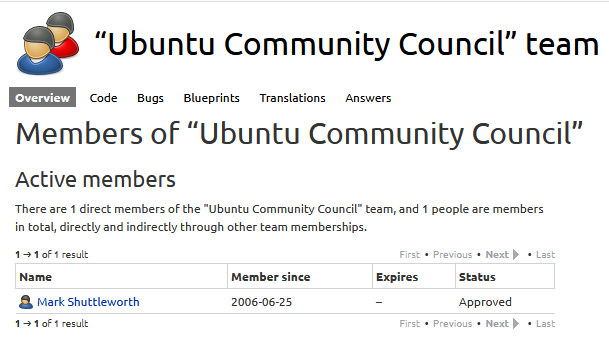 The Ubuntu Community Council has only one member, the 'self-appointed benevolent dictator for life'

The topic of Ubuntu's community has been widely discussed on the project forums and the sense is that the state of the community council is symptomatic of declining volunteer influence. "For newbies we have AskUbuntu, but it does not contain Canonical staff in the leader boards," complained one participant. "So there is no communication between ordinary non-technical user and real developers... Ubuntu community is dying and apply wrong decisions. I know at least two – the GNOME Shell is not really a desktop for enterprise users with 10-20 years formed habits, the Snap subsystem is excessive resource hungry and ineffective for both desktop and server markets."

Another said: "Ubuntu Membership has been steadily declining for years and so has Ubuntu Developers. There hasn't been fully functioning Ubuntu Community Team in years now and the Community Council which is the main governance body has been abandoned and vacant without any official communication from Mark who is the project leader."

Late last week Shuttleworth spoke up to say: "I'm not absent. In fact, for the past few years I have set aside all other interests and concerns to help Ubuntu get into a position of long-term sustainability." He added that he has "long allocated headcount for a community lead at Canonical, a post which has not been filled", though he did not spell out the exact reasons why the post remains vacant. Despite the decline of the official community structures, Shuttleworth claimed he has "continued to see great people getting great stuff done in the community".

The role of the Community Council in dispute resolution has lessened over the years, Shuttleworth said, because "today, we have lots of established patterns for collaboration between the big parts of the community". This meant less work for the council to do and Shuttleworth said he "watched how CC members stopped coming to meetings, stopped organising their meetings, stopped driving activity".

In the absence of any positive proposal from Shuttleworth, it looked likely that the Community Council would disappear permanently. The issues that would arise are about more than dispute resolution because of the body's role in supervising other boards and community groups.

Former council member Walter Lapchynski (@wxl) stepped in to acknowledge that part of the problem with the council was uncertainty about its role, with "a lot of struggle going on trying to define it". Lapchynski said that even a badly defined council was better than nothing, and offered to run a new election.

Shuttleworth then said: "Having considered it over the weekend, with @wxl's offer to help run the process, let's go ahead and call for nominations to the CC... there is a great deal of good work being done, and it would be nice for people to have the CC in place to support that. Apologies again for having dropped the ball."

Canonical's partnership with Microsoft in assisting with the development of WSL 2 (Windows Subsystem for Linux) and the forthcoming addition of a GUI to this Windows 10 feature means that Ubuntu's profile is increasing.

Despite the coming revival of the community council, the fact that it was allowed to become defunct does suggest that the project's governance, and the role of the community, could do with review and reform. A job for the revived council to investigate? ®