Video Alien life may exist in the thick clouds in Venus’ atmosphere, scientists speculated in research published in Nature Astronomy on Monday.

The team of astronomers say they discovered phosphine, a molecule made up of phosphorus and hydrogen atoms (PH3), floating around Earth’s closest neighboring planet. Phosphine is a flammable, toxic gas that’s not all that exciting on its own; it’s what it might be produced by that’s behind all the hubbub today.

On Earth, the chemical is naturally created by microorganisms in oxygen-starved environments. “It comes from certain anaerobic forms of life which are found in pond slime, in the guts of some animals and, oddly, emerging from piles of penguin guano,” David Clements, co-author of the research and a reader in astrophysics at Imperial College London, told The Register.

The astronomers thus believe similar microbes may be producing the phosphine on Venus. The concentration of phosphine found was pretty low; for every billion molecules high up in the clouds, only about twenty of them are phosphine. After considering alternative scenarios – such as the gas being belched by volcanoes into the atmosphere, or formed as a result of lightning, or even brought by meteoroids – the scientists realized none of these processes could generate the levels of phosphine they observed.

Bacteria on Earth capable of producing the gas would only have to work at 10 per cent of their maximum capacity to create the amount of phosphine seen on Venus, meaning it's not a particularly difficult feat and within the realms of possibility on the neighboring world. The planet's gas is perhaps produced by some sort of terrestrial E. coli-like microbe, Sara Seager, co-author of the research and a professor of planetary science at MIT, said during a press briefing:

If this biological process really is happening off world, the bacteria producing the phosphine would have to withstand Venus's extreme concentrations of sulfuric acid. “They have to cope with an environment that is a billion times as acidic as anything on Earth,” Clements added. "At the very minimum they would require protection from the acid in the liquid drops that are the most likely environment for them. This protection could take the form of wax or graphite, or maybe something more exotic such as silicon. Or, since this is all speculation, something we haven’t yet considered."

On the other hand, the phosphine may not have been created by aliens at all. Instead, it's potentially the by-product of some exotic chemical reaction that boffins haven’t thought about, or maybe some geological process that isn’t understood. “Now, astronomers will think of all the ways to justify phosphine without life, and I welcome that,” said Clara Sousa-Silva, a research scientist in MIT’s Department of Earth, Atmospheric and Planetary Sciences, who was involved in the study. “Please do, because we are at the end of our possibilities to show abiotic processes that can make phosphine.” 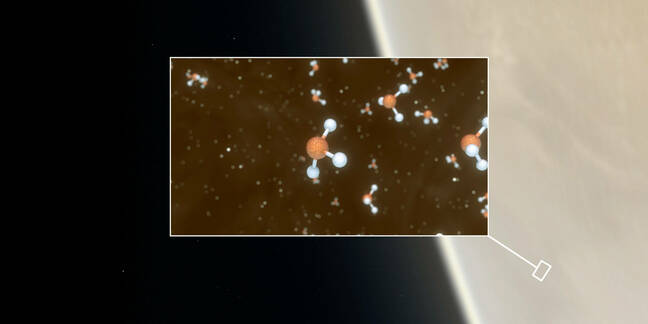 An artist's impression of Venus with an inset showing a representation of the phosphine molecules detected in the high-cloud decks ... Click to enlarge. Credit: ESO / M. Kornmesser / L. Calçada & NASA / JPL / Caltech

It should be noted that phosphine has been previously discovered in other parts of the Solar System. In the 1970s, it was detected in the atmospheres of Jupiter and Saturn, though at the time, the discovery didn’t kick up the same amount of buzz as today because the chemical was produced near the cores of the planets, where there was a high enough pressure and temperature to form the molecules.

Venus lacks the same conditions as these gas giants, perplexing scientists. “We tried very hard to make this result go away,” Clements told us. "We checked very carefully that this was actually phosphine that we’d detected, and not a misidentification, but we are pretty confident now that this is the case. A theoretical route to produce phosphine on Venus without life would be another possibility, but we have checked thousands of chemical reactions that could produce it but they all miss by factors of 10,000 or more. Maybe there is a route we don’t know about though – that would be good to test."

Jane Greaves, an astronomy professor at Cardiff University in Wales, who led the study, first discovered the hint of phosphine using the James Maxwell Telescope in Hawaii, and confirmed the measurements with the Atacama Large Millimeter/submillimeter Array in Chile. The team hopes to study Venus’s atmosphere further to understand how the molecule absorbs UV light.

“Far more research is needed to understand exactly what is producing this phosphine signature,” Jessica Dempsey, deputy director of the East Asian Observatory, who helps operate the James Maxwell Telescope and was not directly involved in the study, told El Reg. “This will include further ground-based observations at telescopes around the world to better understand the chemical processes in the Venusian atmosphere. Ultimately, sending new satellite probes into the Venus atmosphere could provide the key measurements to indicate if indeed there is life on our sister planet.” ®