Bork!Bork!Bork! Windows pops up in the strangest of places. Sure, digital signage – been there, done that. But as something to stare at when one should be directing one's undercarriage? That's a new one.

Spotted some time before the current restrictions were in force by eagle-eyed Register reader Tom, the Bloo Screen of Death (BSOD) has been sprayed above the facilities at a pub in Southport, England.

"Not sure if it was a touchscreen or not," he told us, "not a chance I was going anywhere near the thing."

Users of the urinal have been known to continue telephone conversations during moments of high tension and low flow, so we're sure a spare hand could be utilised to paw at a touchscreen. Indeed, the maker, Captive Media, is known for shoving games on the things with controls presumably dependant on the direction of the stream rather than a handy Wii-mote. 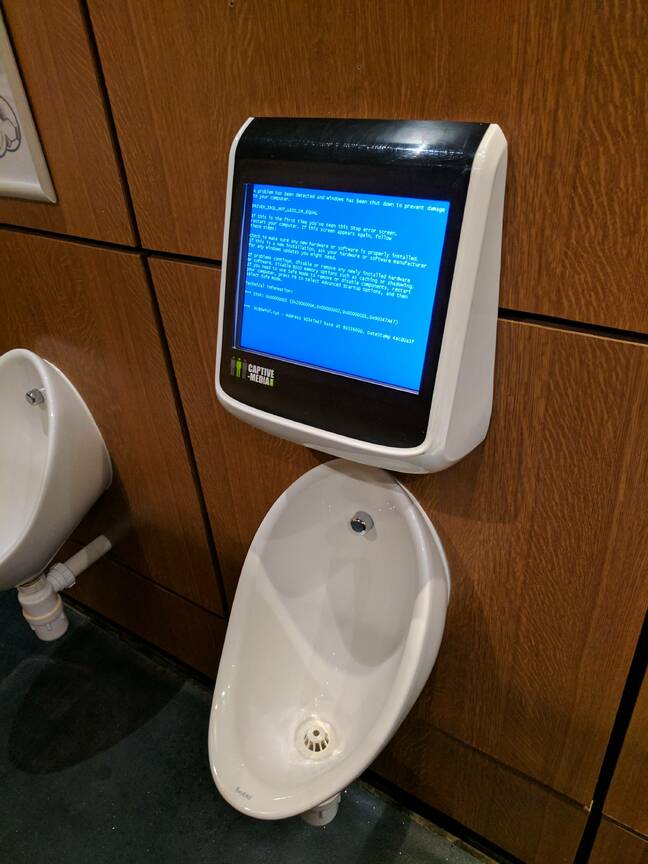 We'll draw a discreet veil over the tagline "Start your flow when you're ready to go" for a Captain Morgan-themed game. Sadly, the company's website fell over before we were able to learn more about what powers its wares.

As for the BSOD itself, it looks very much like the Wi-Fi is distinctly whiffy, judging by the Realtek driver vomited up on the screen. As might be the surroundings: it "wasn't exactly the nicest of pubs," noted our correspondent.

In this instance, we can't really blame Windows for wanting to end it all. There are harsh environments, and then there is Friday night in the Gentlemen's Restroom of a Southport pub in years past. One penny spent too many and Microsoft's finest has opted to end it all.

Farewell, faithful friend. Mind the puddle on your way out. ®