The kiddiwonks won't even know they're learning

Review The Raspberry Pi's pitch is simple: it's a dirt-cheap, low-stakes computer designed to inspire experimentation in software engineering and electronics. Since it first hit the market in 2013, a flood of third-party accessories popped up to help foster that. Take, for example, the Elecrow CrowPi2.

The CrowPi2 shoves a Raspberry Pi 4 Model B into a 11-inch laptop form factor faintly reminiscent of an early 2010s netbook. Though the world has seen no shortage of Pi-based laptops from the likes of Pi-Top and Kano, where the CrowPi2 differs is the extent to which it balances portability with the ease in which punters can experiment with their own electronic creations.

It does this by shoving the keyboard and mouse into a single Bluetooth-connected board, which charges separately via a MicroUSB port. Although this sits flush with the CrowPi2's chassis, you can lift it up to access a development board containing a dizzying array of connections and sensors, all communicating with the Pi's GPIO ports. 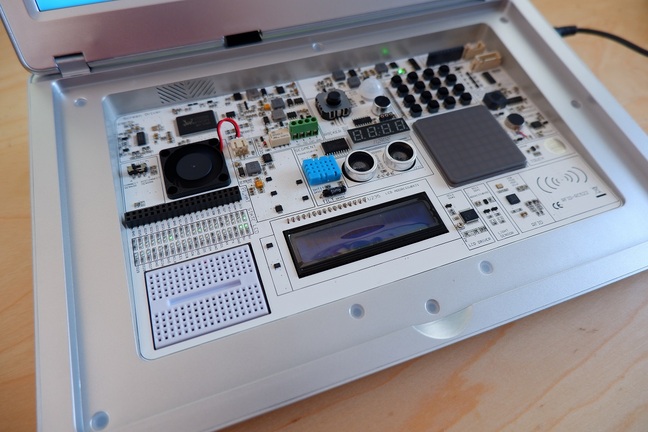 You've got a breadboard, which forms the basis of any electrical tinkering. Adjacent to it are a collection of sensors, motors, and displays, which can easily be incorporated into any project. These range from the straightforward (like light sensors and an 8x8 RGB LED matrix), to the esoteric (temperature and humidity sensors, as well as a PIR sensor for motion detection). There's also a cooling fan, which is perpetually running, and helps dissipate the heat generated by the Pi's CPU.

Although the CrowPi2 serves as a solid foundation to build upon, where it really shines is the generous collection of components and accessories bundled, allowing users to start creating from the get-go.

If you backed the CrowPi2 on KickStarter, the amount of kit varies dependent on how much cash you parted with. The pre-release review model provided to El Reg was the middle tier, and included fundamental electrical parts intended to introduce basic electrical circuitry, like wires and resistors, to more sophisticated fare, like games controllers and NFC cards. There's also a small wireless travel mouse in case you aren't keen on the machine's trackpad. 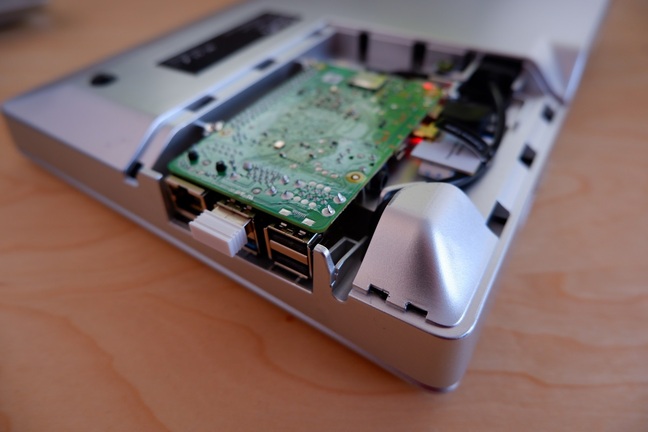 To help keep track of these various gubbins, the laptop comes with a built-in storage port – although this is only big enough for a small percentage of what's actually provided. It's for that reason punters are recommended to hold onto the box the machine came in, or invest in a cheap plastic storage bin from Wilko's.

Ironically, the one thing you're likely to need to use the computer isn't provided – that is, a MicroUSB cable to actually charge the keyboard. Fortunately, I happened to have one (well, several) to hand. That said, this requirement isn't particularly well documented by CrowPi, and it's easy to see how someone - likely not a Reg reader - getting this for their now-homeschooled progeny might get caught off guard. 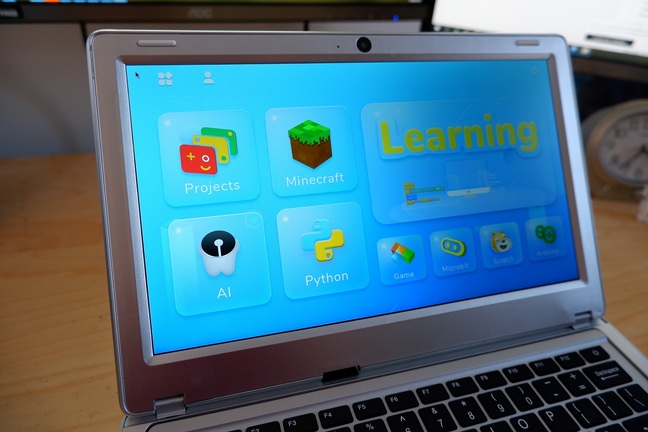 The laptop boots into a kid-friendly (and heavily customised) Linux environment, with big chunky buttons designed to drive the user through some age-appropriate STEM learning. More advanced users can exit that and enter a proper Linux desktop, with access to a terminal and proper text editor. You can also install a distro of your own choosing, including Raspbian, NOOBS, and RISC OS, to name just a few.

We were rather impressed with the overall build quality of the CrowPi. The chassis feels sturdy, and capable of withstanding a drop or two from clumsy young hands. The display is FHD IPS, which is nice as the makers could have easily skimped here. We also appreciated the inclusion of a webcam and a microphone, which will prove handy given the current tendency for kids to learn remotely.

From the outset, this machine is well built to facilitate the whole of school-level STEM education. The CrowPi2 launched on KickStarter, where it raised more than £500,000, and is now available for pre-order. The base model – which comes without a Raspberry Pi board – costs $269, or roughly £210 at today's exchange rates.

For the least fuss, you can get your hands on a pre-built machine, which includes a Raspberry Pi 4 Model B board with 4GB of RAM, as well as a broader supply of accessories and components. That costs $399, or £310.

Finally, there's the deluxe model, which retails at $439, or £340. This offers double the RAM, and additional accessories to those mentioned in this review, including more sensors, as well as a carrying bag. Elecrow expects to start shipping orders in October. ®