Augment me to the Moon, with AR among the stars

Ignite Microsoft will spread its eyewear for the wealthy (or corporate sponsored) across more countries, and has said it is seeing action in NASA's repeatedly delayed mission to the Moon.

While astronauts don Varjo VR headsets for training on Boeing's calamity capsule, the CST-100 Starliner, Lockheed Martin has gone down the HoloLens route for the assembly of NASA's long-delayed Moon ship, Orion. 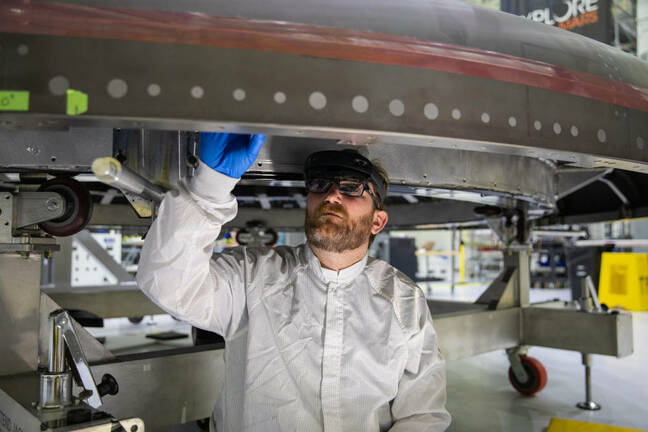 Eric Nolan, a technician working at the Kennedy Space Center, wears a HoloLens2 as he works on the heat shield for the crew module for NASA’s Artemis II mission, the first scheduled crewed jaunt of NASA's Orion spacecraft. Image: NASA

As well as announcing the extension of global availability of the headset, Microsoft trumpeted its application in the assembly of the capsule that might, one day, take astronauts to the Moon... and maybe beyond.

While Artemis I will not carry a crew, Artemis II is expected to, and Lockheed Martin has popped the device onto the heads of engineers tasked with tightening bolts, threading cables and attaching sensors to the capsule. 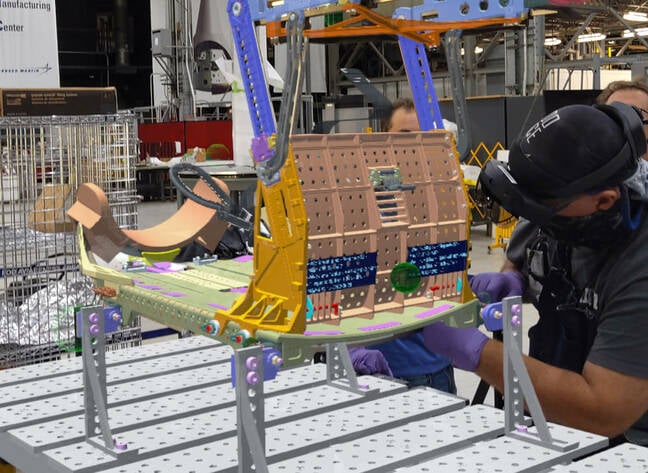 This image, captured with a HoloLens 2 headset, shows the holographic instructions overlaid on the crew seats. Image: Lockheed Martin

The tech first saw use by the aerospace outfit in 2017, and the latest incarnation has seen some tasks completed 90 per cent faster, according to Shelley Peterson, Lockheed Martin's principal investigator for augmented and mixed reality.

Getting anything completed faster than expected is an unusual feat for NASA's Artemis program. The agency's next Big Rocket is more usually associated with delays and budget busting.

"The fact that we haven't had any errors across all of these activities is phenomenal," said Peterson.

The Artemis capsules, of course, have yet to actually head to the Moon. Artemis II, the precursor to 2024's lunar landing, is currently scheduled for launch in 2023 with a crew of four. The mission will see the capsule swing around the Moon on a free return trajectory. 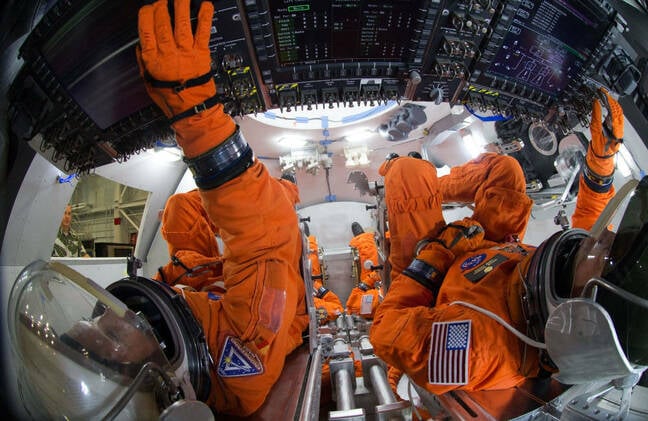 Technicians used HoloLens 2 devices to assemble the crew module seats, similar to these seats in a mockup of the Orion spacecraft, for the first Orion mission to carry astronauts into space. Image: NASA

Peterson told The Register that the environmental mapping features of the HoloLens 2 allowed the company to map models and instructions over spacecraft surfaces, making life easier for technicians. Those same technicians also made use of the gesture recognition capabilities of the device, with ghostly menus appearing on wrists and virtual lasers to select icons of options: "They love this..." she told us, "they say it makes them feel like Iron Man."

Peterson also paid tribute to the Worklink platform used in the system, explaining that it "adds features to allow for fine positional calibration to the real life structures." Kind of important for the tolerances needed for spaceflight.

Lockheed Martin plans to continue using the headset. Peterson told The Register she expects to see it "on the production of many spacecraft," with the likes of GPS satellites featuring as well as Artemis. She also saw possibilities for use in space, to assist with astronaut situational awareness as well reducing the need for what she called "rectangular data" – 2D screens or, whisper it, paper.

NASA is no stranger to the headwear. A set was sent up to the International Space Station (ISS) five years ago and NASA's Jet Propulsion Laboratory famously used the technology to visualise Mars for trundlebot course-plotting purposes.

As for Microsoft, as well as the expansion of HoloLens 2 availability to the likes of Hong Kong and Taiwan, it used Ignite to kick off a private preview of Azure Object Anchors, aimed at the recognition of real world objects and the mapping of relevant visuals and instructions to it.

For Lockheed and other users of the technology, however, the headset (and tech like it) has brought forth another unexpected boon. Microsoft has long banged on about the collaborative possibilities of the tech, but the distancing arising from the current pandemic has meant that the gimmick of one employee remotely checking another's work, or giving advice based on what is in view, has suddenly become rather significant. ®

Interview Kubernetes under the covers, with a Microsoft flavour
Devops3 Nov 2021 | 8