Video NASA intends to scoop up material from the surface of the Bennu asteroid on 20 October, and has planned up to three retrieval attempts before returning any samples back to Earth.

"Bennu is like a time capsule," said Thomas Zurbuchen, associate administrator of NASA's Science Mission Directorate, on Thursday. "It has been out there since the Earth's beginning 4.5 billion years ago."

NASA believes that Bennu holds the key to studying how the planets in the Solar System formed, and how they will evolve over time. Bennu is also a potentially hazardous asteroid – scientists estimate that there is a "non-negligible chance" that it could hit Earth some time in the 22nd century.

Launched in 2016, the Origins, Spectral Interpretation, Resource Identification, Security, Regolith Explorer (OSIRIS-REx) probe has been orbiting Bennu, the spinning top-shaped asteroid 200 million miles away from Earth, since 2018. It has been trying to find the perfect landing site to steal rocks from and, after careful analysis, NASA settled on a 16-metre-wide crater named Nightingale.

The probe has virtually rehearsed the landing process multiple times, and will finally have a proper go at collecting space rock dust next month in what the steely eyed rocket folk at NASA call a touch-and-go (TAG) process.

OSIRIS-REx will slowly descend towards Bennu until its 3.35-metre-long arm grazes the ground three times. It carries three of canisters nitrogen gas to kick up a cloud of dust to be collected by a sampler head at the end of its arm.

During the manoeuvre OSIRIS-REx will fold back its solar panels into what NASA calls a "Y-wing" configuration (spot the Star Wars fans) to reduce the risk of damage from a collision. It also has the benefit of shifting the spacecraft's centre of gravity to directly over the robot arm.

The sampling process will be have to be quick; Mike Moreau, the deputy project manager of the mission at NASA's Goddard Space Flight Center, said on Thursday during a NASA press conference that OSIRIS-REx's arm will be in contact with Bennu for no more than five to 10 seconds. The team wants to retrieve at least 2oz (60 grams) of the stuff. 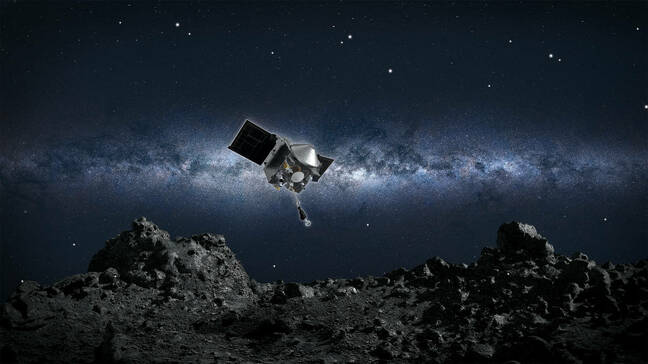 Dante Lauretta, principal investigator of the mission and professor of planetary science and cosmochemistry at the University of Arizona, told reporters during the briefing that he reckons OSIRIS-REx will probably complete its goal on its first attempt.

In an ideal scenario, it would take a kilogram's worth of regolith, he said. The sample will be shared among several research labs, and a lot of it will also be kept for future generations.

The Nightingale crater was chosen for its loose, fine-grained surface; NASA is looking for rocks the size of a nickel. "It's not the sandy beach that we expected," said Zurbuchen. Old images of Bennu made its surface look smooth, but upon closer inspection it's actually rough, rugged, and littered with boulders, making it difficult to blow up enough regolith to collect, he said.

NASA won't know if the spacecraft has been immediately successful in scooping enough material; it'll check by getting the probe to spin and thus find out how much extra mass has been added. The sample will also be photographed and the images checked by NASA boffins.

Not only does Bennu contain water, clay, and minerals, a recent study revealed it may have some material from Vesta, one of the largest objects in the asteroid belt, leftover from an ancient collision, NASA explained in the press conference.

"Our leading hypothesis is that Bennu inherited this material from its parent asteroid after a vestoid (a fragment from Vesta) struck the parent," said Hannah Kaplan of NASA's Goddard Space Flight Center. "Then, when the parent asteroid was catastrophically disrupted, a portion of its debris accumulated under its own gravity into Bennu, including some of the pyroxene from Vesta."

Once scientists confirm that the probe has taken enough material from Bennu, the sample will be safely locked away in a capsule to be flown to Earth. If all goes to plan, OSIRIS-REx will re-enter our atmosphere and dispatch its parachutes to land in about three years on 24 September 2023. ®

Yeah, they do have a habit of being in places where they are no longer welcome
Science5 Aug 2022 | 11