Review In many respects, working from home is liberating. Standards of attire and hygiene are the first to depart; after all, the only person likely to see you in person is the Deliveroo courier. Best of all, the absence of a manager walking past your desk also allows you to take certain liberties with your work environment.

The Corsair K70 MK.2 is a mechanical keyboard that feels as though it's built for our current coronavirus hellscape. Would it fly in a normal office, where serious people wear drab suits and grimly chug mugs of lukewarm instant coffee as they file their TPS reports? Hell no.

It's too colourful for that. It's fitted with enough RGB lights to illuminate techno rave. It looks like what would happen if Foxconn made Skittles. 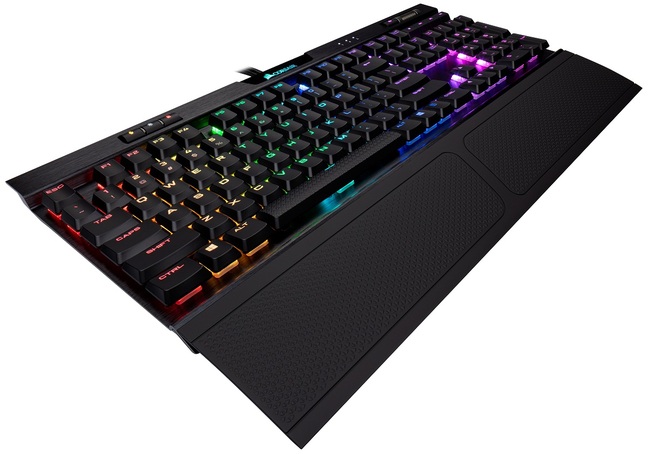 Also, like any keyboard using Cherry MX Blue switches, the Corsair K70 MK.2 is loud. That's not a bug; it's a feature. Many people – myself included – prefer their keyboards to have a bit of noise. The constant percussive rhythm helps get you into the flow of things.

The noise produced by a Cherry MX Blue switch is often compared to that of a typewriter. While that's fine at home, it may earn you the ire of your co-workers.

There are hundreds of keyboards that offer RGB lighting and Cherry MX Blue switches (or, at the very least, a clone), and you can get these for as little as £40. But the the Corsair K70 MK.2 costs £150. Why?

It's the little things. Despite being a full-sized keyboard, the K70 MK.2 is surprisingly efficient with the space it uses, with the most marginal borders on its left and right sides. There's also an optional (but included) wrist rest, which snaps into the foot of the keyboard. By elevating your hands, this helps give your fingers more reach, and thus reduces the amount of wrist movement.

Meanwhile, media keys – which are often an afterthought – are implemented beautifully here. There's a scroll wheel for volume control. Playback controls are located above the number pad, and are actual proper firm keys – although for obvious cost-saving reasons, they don't use the aforementioned Cherry switches.

The keycaps are firm and well rounded. Letters and characters aren't printed on the keys themselves — or injected into them — but are rather represented by transparent elements of plastic. This means you don't have to worry about your keys rubbing off with prolonged use.

With this model, Corsair has ditched the flat profile used by other keyboards we've seen in the past, and instead slightly elevates each row to make them easier to reach. Another nice touch is the decision to give the space bar a distinct texture. This offers your hands something of a grounding when you're touch-typing, presumably to improve accuracy. 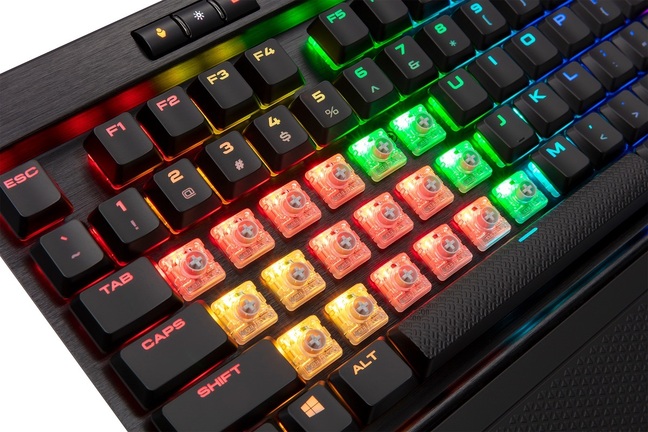 Like every IT bod knows, keyboards are prone to accumulating dust, debris, and wayward hairs. Periodic cleaning is necessary. The K70 MK.2 makes this easy by ditching a recessed design, and having each key float above the chassis. This makes it easy to wipe down the base and vacuum away any detritus without much fiddling.

As an added touch, the rear of the keyboard provides a single USB-A passthrough port, allowing you to connect an extra peripheral, like a mouse or USB flash drive. However, this largely feels moot as the keyboard itself uses two USB ports.

Perhaps the hardest pill to swallow with this keyboard is the price. At £150, it isn't cheap. It's also in the same ballpark as other productivity-focused boards, like the recently reviewed Das Keyboard 4C, as well as UNICOMP's Model M clones.

At that price, it's worth remembering you're ultimately paying for quality and not functionality. There's nothing the Corsair K70 MK.2 does that another cheaper board can't do. But the attention to detail and high-quality components (like actual Cherry switches, rather than a knock-off) make this a viable option. ®