The American space agency's Mars Reconnaissance Orbiter (MRO) has been circling, and photographing, the Red Planet for more than 14 years, and by comparing historical and fresh images from the probe, boffins try to discover craters formed by meteorite strikes. The problem is that, once the snaps are transferred back to Earth, it takes someone the best part of an hour to analyse a single picture from the MRO's cameras and identify potential crash sites for closer inspection, whereas an artificial neural network can do the same job in mere seconds.

“AI can't do the kind of skilled analysis a scientist can," said Kiri Wagstaff, a NASA computer scientist, on Thursday. "But tools like this new algorithm can be their assistants. This paves the way for an exciting symbiosis of human and AI 'investigators' working together to accelerate scientific discovery." 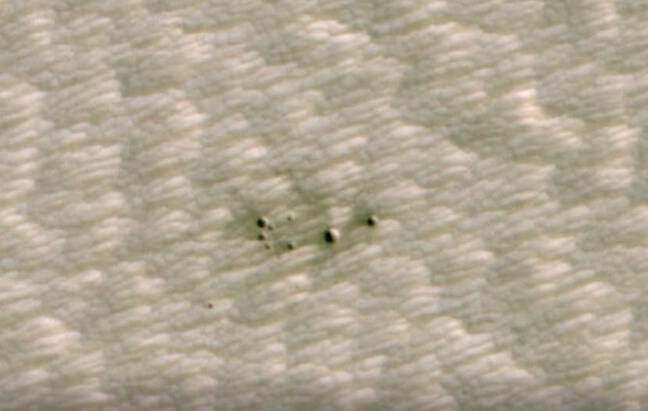 Now you see us ... The crater cluster spotted by the machine-learning software. Credit: NASA/JPL-Caltech/University of Arizona. Click to enlarge

Once a possible impact zone is identified, the orbiter's super-camera – known as the High-Resolution Imaging Science Experiment (HiRISE) – is used to check for sure. This equipment has such fine resolution, it can pick out the tracks of NASA's Curiosity rover.

And now the team's AI has identified a cluster of what appears to be small impact craters around 13 feet (4 metres) in diameter that were created sometime between March 2010 and May 2012.

To get this far, this a team of computer scientists at NASA’s Jet Propulsion Laboratory built a classifier to detect craters, and trained the model with 6,830 images; some contained known depressions in the Martian surface, others had no craters in them at all.

Next, the trained model was deployed on a supercomputer to crunch through NASA’s collection of 112,000 images taken from the orbiters cameras. "It wouldn't be possible to process over 112,000 images in a reasonable amount of time without distributing the work across many computers," said agency computer scientist Gary Doran. "The strategy is to split the problem into smaller pieces that can be solved in parallel."

“There are likely many more impacts that we haven't found yet," added Ingrid Daubar, a scientist at NASA and Brown University in the US. "This advance shows you just how much you can do with veteran missions like MRO using modern analysis techniques."

The American agency hopes it can one day perform the image processing onboard spacecraft without having to hand the data over to scientists on Earth first. That, however, requires rad-hardening specialized hardware that can perform inference in space at a reasonable level of power consumption. ®