BOFH: Rome, I have been thy soldier 40 years... give me a staff of honour for mine age

Or, you know, just sign on this dotted line 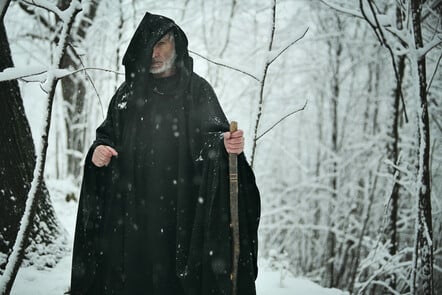 George, our faithful cleaner, has joined us in the office this morning. And, despite being in an age group that makes a cold snap potentially fatal, he's still ticking.

Thanks to his great-grandfathered employment policy, he cannot technically be forced to leave the company's employ until the day of his funeral – at which point he'll still be eligible to claim travel expenses.

To be fair, his work speed isn't what it once was – so much so that he's probably on the asset register as furniture, but he nonetheless shows up in the early afternoons to "do the preliminary work" of the night-time cleaners. Or, more accurately, sift the bins for bits of paper with two uppercase letters, six lowercase letters and two digits hastily scribbled on them.

Reporting people's conversations is more of a hobby for him now – though many a user uprising in the past has been quelled once the ringleaders have spent a bank holiday weekend trapped between floors in a lift smelling strongly of urine, sweat, and faeces. And maybe a whiff of betrayal.

The office, in the meantime, is creeping back to life. I say creeping because the company's a bit wobbly on its position on returning to work at the moment.

It's such an inopportune time for George to announce his retirement.

"You can't!" the PFY gasps when George breaks the news to us.

"I have!" George responds.

"But who will…" the PFY begins, before realising that coming in, reading the newspaper over a cup of tea, pushing a cleaning trolley aimlessly around the building for a couple of hours then making another cup of tea and going home early isn't vital. "... uh ...keep an eye on the users?"

"My nephew," says George, pulling out the ID badge of a bloke whose aged appearance would suggest he has a Medalla de la Campaña tie pin that he wears to the pub every 18 July.

"Oh, I have a couple of investments," he says. "This building for instance."

"The company owns this building," I shoot back.

"No, I own this building," George responds. "In the to-ing and fro-ing of the building sale and purchase agreement they neglected to check that the documents they left on the boardroom table at night were the same ones they signed in the morning. And the 12-year upfront rent payment runs out tomorrow, at which point they'll need to negotiate a new lease."

"Yes, it was a guess on my part about the amount of time it would take all the signatories to leave the company, leave the board or pass away from natural causes."

About now I'm wondering if "natural causes" includes a recent unsolved hit-and-run involving one of the eldest board members...

"But they bought it from the owners!" I say.

"They LEASED it from the NEW owner – me. I bought the building from the previous owner – a government department – for £1, yet another example of people not checking the documents they leave on the desk at night are exactly the same as the ones they sign in the morning. They didn't fight the sale too vigorously, though, as the building had recently received an appalling structural integrity rating."

"...As a result of a board not considering that a document might have been added into the board papers?" I ask.

"It was a combination of things really," George responds. "A board not considering that a seismic report document might have been added to the board papers; not considering that a second document in the form of a legal opinion about the personal liability of local government officials had been added to the papers; a board not asking who commissioned the structural review; and a board not asking who called the special general meeting in the first place.

"They were simpler times," he adds, smiling wistfully.

"So you OWN this building?" the PFY asks.

"So why are you cleaning it?!"

"A) to keep an eye on my asset, B) to enable me to slip the occasional page into the 'to be signed' folder on the CEO's desk noting that the 12-year lease is due to expire (for audit trail purposes), and C) for the fun of it."

"I have rock-solid Sale & Purchase and Lease agreements and photocopies of those audit trail documents," he says.

"Someone will know," I say.

"I believe the only remaining lease signatory is our retired legal counsel – though he recently had a little mishap when someone forgot to close a window," he says. "I doubt he'll have much to add in the time he has left. So once I've negotiated a new lease then sold the building I think I'll have a nice little nest egg to live off.