From the Department of WCGW: An app-controlled polycarbonate lock with no manual override/physical key

Did we mention where it goes? Plus: LinkedIn trolling and other lockdown fun

Something for the Weekend, Sir? My private parts are private, for sure, but I never thought about giving them a passcode.

But it appears in fact you can slam your whole todger into its own private trouser vault that can be opened only by your partner's smartphone. Not so much block-and-tackle as lock-and-tackle. Who'd have thought the hackneyed line "There's an app for that!" could be used as a reply to the question "How can I bolt my dick in a coffer but still respect social distancing?"

You have to admit, the Cellmate schlong-strongbox sex toy is going to put that IoT egg-timer you were going to buy on Prime Day in the shade.

Many of you will have noticed, as I did, that the Cellmate raised its improbable polycarbonate head in the news this week. The story goes that a cybersecurity firm discovered a basic flaw in the Cellmate that risks compromising its security. Apparently a bad actor could stick their, er, oar in, geolocate every Cellmate wearer, and prevent the app from unlocking any of the devices.

According to Pen Test Partners, there would be only two ways to "free willy" in this situation: either (a) prise open the circuit board and press batteries against two specific wires to trigger the motor release, or (b) use bolt cutters. Given that I can't find the instructions for solution (a) on WikiHow, I'm guessing a panic-stricken but gingerly applied (b) would be the more likely scenario among the cock-locking community.

It's such a shame given all the work the manufacturer put into the sales pitch: "The world's first app-controlled chastity device!" You'd think they of all people would know that coming first isn't always the right thing to do.

Oh to be a fly on the wall of accident and emergency when the men come waddling in, clutching their inflamed (and not in a good way, IYKWIM) crotches and complaining of falling victim to "a sophisticated hack" of their "most personal data". Not that a hospital is a place you'd choose to go to at a time like this.

But then it has been a funny summer, hasn't it? In the seven pandemic months since you and I last shot the breeze together, we've seen how virtual isolation makes many people do odd things. Not us, of course: many other people.

OK, I admit to doing one strange thing during both lockdowns. While you were probably learning how to bake soda bread, reading Tolstoy, and wiping your arse with dead leaves, I found myself drawn to LinkedIn, where I have been trolling those who post inspirational quotes or virtue-signalling tales of how fantastic their working lives are.

If someone writes some bollocks such as "Today is your life's tomorrow!" I respond with "Is that the new Bond film?"

Or when a self-aggrandising professional waster invites her contacts to come up with "two words you dread the most" and suggests "sacrifice, discipline", I come back with a list of much more obvious pairings such as "uh oh", "in conference", "mene tekel", and "wash separately".

A bloke came on just this week to boast that he and his mates were all set for the second lockdown because, as he works in the games industry, his employer had just sent him a pile of the company's newest products. I told him my employer had done something similar and that I work for Andrex.

I can't help it. I have LinkedIn Tourette's.

I'm not the only one to be busy during this time. It's been a fascinating summer of dodgy face masks. The first set I purchased via Amazon were thinner and more porous than my nylon socks, and smell like them too.

My absolute favourite non-product in this sector is Cabeau Tape, a "medical-grade, hypoallergenic, FDA-approved and dermatologist-recommended tape used to seal the gaps around the perimeter of any filtration mask with multiple patents pending."

Impressed, eh? They invented sticky tape! How did civilisation get this far without such a product ever existing before?

Second only to the mind-shattering originality of Cabeau Tape is the brilliance of Marjorie, a graphic designer who realised she could photoshop her friends' laboratory reports with 'Negative' marked at the bottom, allowing them to beat France's travel restrictions and fly home.

Who'd have thought you could do such a thing with Photoshop? It's like Day of the Jackal but without De Gaulle and more flared nostrils.

Back home, the lockdowns meant I was one of the many who found themselves refused permission to rub shoulders with fellow freelancers at their usual co-working spaces. For me, this meant bye-bye stonking work broadband and hello rubbishy domestic ADSL, followed by come-to-my-bosom 4G, and holding on to hope for oh!-yes!-yes!-oh!-yes! 5G as soon as possible.

Forcing office workers to do what they do from home has been problematic. On one hand, it means not having to commute to work or stifle a laugh when your boss has an idea. On the other, you miss out on free tea and biscuits; some hipster spaces have beer and crisps; unicorns have slides and ice-cream. Sod your pay rise falling behind inflation again, your employer knows how much value you put on those biscuits.

A Microsoft blog mused that a decent employer, unable to dull the revolutionary tendencies of homeworking plebs by feeding them the usual beer and crisps as they would at the office, might want to consider giving their staff "digital snacks" instead. If the MS blogger meant free phone handsets or (in my case) an upgrade to fibre, then they got it bang on. In Singapore, for example, there was talk of a national health promotion in which citizens willing to participate in "wellness challenges" (i.e. stop taking sickies, stay away from hospitals) were awarded Apple Watches.

Unfortunately, I think Microsoft's idea of a digital snack is "helping customers modernise their endpoint management" – which to me sounds like a euphemism for taking a bolt cutter to a customer's hacked Cellmate. 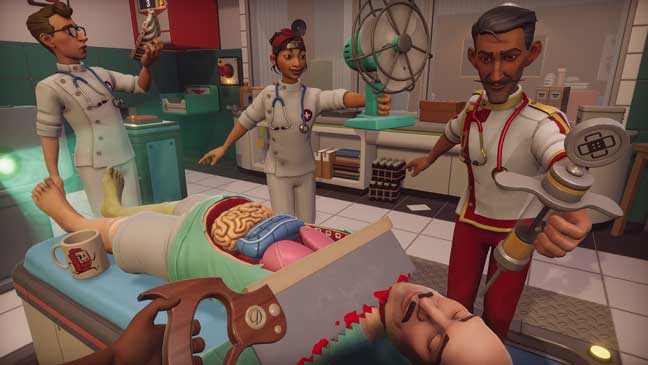 'Quick! We're losing him! Pass me an inspirational quote!'

It's just a bit of fun, of course, and Dr Morgan is in on the joke. As a medical training tool, Surgeon Simulator 2 is on a par with the classic board game Operation – which I understand has now been ordered in the millions by Dido Harding. Just in time for Christmas!

Don't tell Dido but if you work for the NHS, you can get Surgeon Simulator 2 for free until 22 October.

Alistair Dabbs is a freelance technology tart, juggling tech journalism, training and digital publishing. He hopes you came out of the summer relatively unscathed and have applied the necessary personal bug-fixes in time for Lockdown v1.1. And if you find yourself wishing a tiny part of your remaining life away just enough to bring you closer to beer o'clock, this second helping might keep you occupied for another 10 minutes. @alidabbs