Astronomers have watched a star be destroyed by the process of spaghettification, a rare event triggered when a sun strays too close to a black hole.

AT2019qiz was ripped apart by a supermassive black hole in the constellation of Eridanus. Though it is 215 million light years from Earth, it is the closest star we've seen annihilated in such a way. The extreme tidal forces exerted on the sun stretched it into long noodle-like strands that were torn apart as it was gobbled up, a violent affair that set off bright flares of electromagnetic energy. 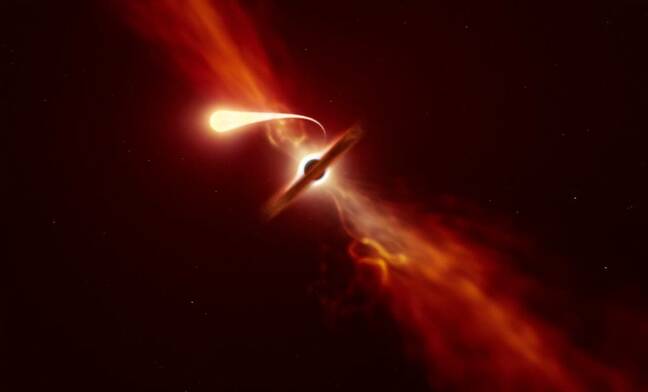 My god, it's full of spaghetti ... An illustration of AT2019qiz being torn apart. Credit: ESO/M. Kornmesser. Click to enlarge

“When an unlucky star wanders too close to a supermassive black hole in the centre of a galaxy, the extreme gravitational pull of the black hole shreds the star into thin streams of material," said Thomas Wevers, a research fellow at the European Southern Observatory, on Monday.

Although spaghettification is a well-described process in theoretical physics, observing it in the real world is difficult. The telltale emissions of energy from such events are normally obscured by thick dust from the stellar destruction. A team of astronomers led by the UK's University of Birmingham was able to spot the spaghettification of AT2019qiz by catching it early before a cloak of dust had settled around the supermassive black hole. The researchers published their results in a paper in the Monthly Notices of the Royal Astronomical Society on Monday.

“Because we caught it early, we could actually see the curtain of dust and debris being drawn up as the black hole launched a powerful outflow of material with velocities up to 10,000 kilometers per second," said Kate Alexander, co-author of the study and a NASA Einstein Fellow at Northwestern University in the US.

"This unique 'peek behind the curtain' provided the first opportunity to pinpoint the origin of the obscuring material and follow in real time how it engulfs the black hole."

Alexander told El Reg the first sign of the spaghettification of AT2019qiz was a bright blue flash from the center of a nearby galaxy.

“The blue light alerts us to the presence of hot gas, debris from the star that has been heated by the disruption process,” she said. The researchers observed AT2019qiz over six months in various wavelengths, including radio, optical, X-ray, and ultraviolet. They were able to study the relationship between the radiation emitted during the black hole’s feast, and the material erupting from the star as it was eaten for the first time.

“The observations showed that the star had roughly the same mass as our own Sun, and that it lost about half of that to the monster black hole, which is over a million times more massive," said Matt Nicholl, first author of the paper and a lecturer at the University of Birmingham. The other half of its mass was dispersed as a stream of gas into the surrounding space.

“Although black holes have a reputation as 'cosmic vacuum cleaners,' a star has to get extremely close to the black hole, in fact, before the gravitational tidal forces are strong enough to tear it apart,” Alexander told us. “Most stars in galaxies are on stable orbits that keep them far away from the danger zone, so in any specific galaxy, a star is only torn apart in this way about once every 10,000 to 100,000 years.”