End of the WordPress era? No, we're aiming for 50% of web, says founder

WordPress founder Matt Mullenweg has engaged in a war of words with the Jamstack community on the merits of the latter's emerging new architecture for web applications.

Jamstack – where JAM stands for "JavaScript, APIs and HTML Markup" – is an architecture based on deploying web applications as static files, retrieving dynamic content from APIs such as those published by microservices. Developers typically use a static site generator such as Next.js, Gatsby, Hugo, or Jekyll. Page load time is quicker because no web server is required, especially when used in conjunction with a content delivery network (CDN).

Advocates of Jamstack are convinced that it is the future of web applications, but Matt Mullenweg, creator of the ever-popular WordPress blogging and content management platform, has spoken out against it.

Public debate kicked off at the end of August, with Mullenweg telling reporter Richard MacManus: "Jamstack is a regression for the vast majority of the people adopting it. The usability and functionality is actually lower. Even rebuilding sites in Jamstack harkens [sic] back to the Movable Type days, where the bigger your site gets, the slower it is to rebuild or update templates."

Netlify CEO Matt Biilmann responded, declaring "the end of the WordPress era" and insisting that "obvious pains around acceptable performance, scaling, maintaining, operating, and securing WordPress installs" are "an ever increasing burden rather than a reasonable trade-off." 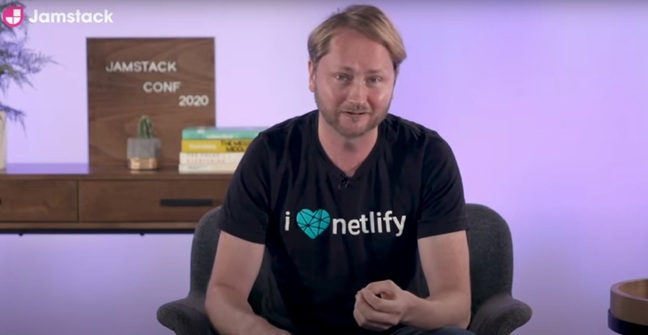 The Jamstack crowd decided to invite Mullenweg to their virtual Jamstack conference, where the two Matts faced off in a public debate. This was fascinating, not only because of the technology at play, but because of the dominance of WordPress on today's web. According to W3Techs' stats, WordPress is "used by 63.6 per cent of all the websites whose content management system we know" and by "38.5 per cent of all websites."

The face-off had some odd aspects. Jamstack is an architecture, but WordPress is an application, and while Mullenweg was happy to be an advocate for "not Jamstack", much of the time he fell back on the status of WordPress and its official hosting site, WordPress.com. While seasoned CEO Mullenweg proved more than a match for the Netlify chief in terms of debating skill, careful observers could see that not all of Biilmann's arguments were answered.

"Last time I checked, about 90 per cent of major security incidents infected WordPress," said Biilmann. "It's not the best track record."

On security, Mullenweg said that the key issue was making updates "frequent and easy" and that Jamstack, which typically uses "dozens of NPM packages" for building sites, has "the same issues that you have over plugins". Mullenweg claimed that the auto-update built into WordPress means that "we can get 70 to 80 per cent of WordPress sites on the latest version within a few weeks."

On the matter of performance, Mullenweg claimed that Jamstack "is not intellectually honest in its marketing. If serverside performance were the biggest problem for web performance, sure, but Google and everyone else says that's only 10 to 20 per cent of what happens. Where performance really matters is client side... I think the best thing you can do for performance is be completely dynamic but put a caching CDN in front of it. Cloudflare two days ago announced WordPress integration."

Billmann maintained that WordPress has become a dead end for developers. "They see that there's a very rapid iteration and innovation going on in the modern front-end ecosystem... Once developers get trapped within a monolith where they have to rely on the template language, build infrastructure round it, they get cut off from that ecosystem. That creates a lot of frustration."

Never mind the technology, look at the numbers, said Mullenweg. "The integrated approach which uses the monolithic is winning... The two that picked up the biggest market share this year have been WordPress, which added about 3 per cent of the top 10 million websites, and Shopify, which added about 1.1 per cent. If you Google 'built with WordPress', you'll see WordPress actually accelerating its growth over the past few years."

"I don't think the era of WordPress is over," Mullenweg added. "I think we're going to reach over 50 per cent market share in the next few years."

This is not so much to do with architecture, but rather because users love software-as-a-service, whereas Jamstack is about custom development. There is not yet a Jamstack equivalent to the likes of Shopify, Squarespace or Wix, all mentioned as growing businesses.

WordPress and Jamstack are not completely in opposition. "I still think WordPress can play a really important role in the future ecosystem," said Biilmann. The pattern he said he sees is WordPress used as a headless service, with developers "completely being in control of the front end layer."

The WordPress Calypso project is also interesting, being a single-page application driven by the WordPress REST API, close to the Jamstack model but used for administration rather than being public-facing. "We have a beautiful REST API, a GraphQL API, you can use it decoupled, do Serverless pre-rendering using React – there are so many ways to integrate," said Mullenweg.

Matt and Matt have one thing in common – both are open-source advocates. Biilmann said that he embraced Jamstack because "the web really needs this to stay competitive with the walled gardens like Facebook instant pages, Google and so on," and later that "the open independent web is really important. We want open standards, we want building blocks, we want a vibrant ecosystem." Mullenweg concurred, saying: "I strongly agree."

Mullenweg may not want to lose customers to Jamstack-driven alternatives, but it's hard not to agree with Biilmann that there are some inherent issues with WordPress architecture, and that borrowing from the Jamstack approach may be part of the solution. ®

You won't see 'Agent of vile murderous autocracy' on their CVs. Or their faces on vid chats
Security9 Dec 2022 |

What, you thought green tech shift will come from the good of their hearts?
On-Prem9 Dec 2022 |