The COVID-19 pandemic has turned laptops — particularly those deemed "cheap and cheerful" — into a desperately sought-after commodity as education and work moves to the home.

Institutions and parents alike are waiting longer and paying more for machines - even the so-called cheap laptops. Of course, there's another way. There's always another way.

Readers of this publication may know I've got something of a penchant for collecting old tech. Indeed, my office houses a small museum of elderly computers, some of which receive routine usage. I'm writing this article on my favourite computer of all time — an Apple PowerBook G3 Lombard.

Now, I'm not suggesting you buy your offspring a 22-year-old computer that's not even capable of proper multitasking, let alone running a modern web browser. But for anyone struggling to obtain a machine for home learning and Zoom calls, you could do worse than get an early-model polycarbonate MacBook.

These machines were some of Apple's first Intel-powered machines. They fall within a particular vintage sweet-spot. They're old enough to be obsolete, yet also common as muck. If you spend more than £30 on one on eBay, you've been ripped off. The cheapest one I ever got for was £15, including postage. 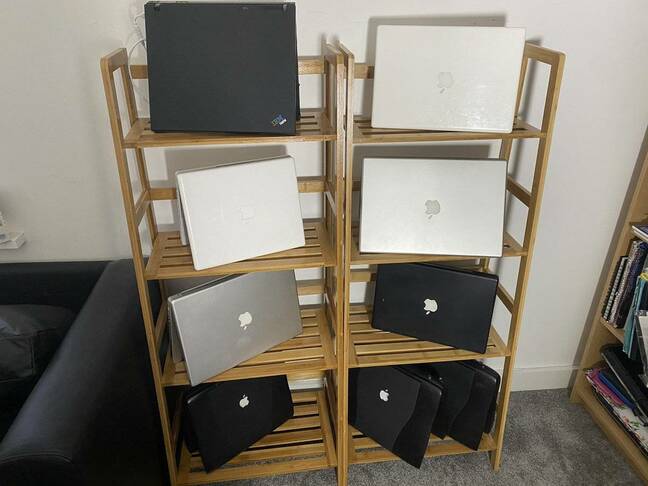 Matt's mostly Mac collection of classic computers. It's remarkable to think that upon their release, these machines would collectively have cost around £20,000.

As for where to buy it, for eBay, you can substitute any auction system, because you tend to pay the market rates. eBay (other online auctioneers are available) also benefits from specialist sellers auctioning decommissioned workplace kit, making it easy to get a bargain. Failing that, you can usually find preloved MacBooks on Shpock and Gumtree and via pawnshops (Cash Converters, etc), but they're usually way overpriced, because people think: "Well, I spent £1,000 on this over a decade ago, so it MUST be worth at least half that?"

A huge factor in why they're so cheap is because they can't run any version of MacOS beyond version 10.7 Lion*, which was long abandoned by browser makers. The latest versions of Google Chrome and Firefox require newer versions of Apple's operating system, which simply refuse to play nice with early-generation MacBooks.

But they can run Windows 10 with a gentle bit of coaxing. Not officially, mind you, but it's possible - with one user calling the combo "shockingly usable". And Linux, obviously.

Most Linux distros should play nicely with an old MacBook when it comes to things like drivers — although you might have to make some tweaks when it comes to the keyboard and mouse. I'm inclined to steer people towards Elementary OS, which also apes the MacOS aesthetic nicely. Like all Linux systems, if you get stuck, help isn't far away. There's also Ubuntu, or perhaps Linux Mint. And you can add your own suggestions below.

When you cross those thresholds, you ultimately end up with a machine that's capable enough for most day-to-day tasks, particularly those done within the context of homeschooling. By ditching the last supported MacOS version, you get access to the latest versions of Chrome, Firefox, and even Edge. We don't judge. And the Core2Duo processors used in these machines are powerful enough to render web pages and play online video without any punishing sluggishness.

Another reason why I'm somewhat evangelistic about these old machines is that it's still easy enough to obtain aftermarket upgrades and parts. Unlike newer Apple laptops, Cupertino designed early polycarbonate MacBooks to be simple to self-service. To install fresh RAM and an SSD, you just need to loosen three screws and slot the new components in. It couldn't be more straightforward.

These machines use standard DDR2 SDRAM. A pair of 2GB sticks will set you back less than £16. While you're at it, you'll want to replace the old mechanical hard drive with a faster, more power-efficient SSD. A 120Gb SATA III drive shouldn't cost more than £20, and you get your pick of manufacturers to choose from: Kingston, Western Digital, and err, FattyDove.

Admittedly, a battery replacement isn't out of the question. We are, after all, talking about 13-year-old computers that have seen some usage. There are no shortage of manufacturers flogging these, and some are half-decent. I spent £25 on one, and it works great.

If you're more mechanically minded, you might also want to consider opening up the case to remove any accumulated dust and replace the laptop's thermal paste. This isn't obligatory, and it does require the removal of an intimidating amount of screws, but it'll make your machine run cooler and improve its battery life drastically.

So, worst-case scenario, you're looking at spending £100 on a computer with a proper SSD (none of that eMMC muck), a 13-inch screen, a fresh battery, and a decent-enough processor. That's not a bad deal. And that's without mentioning the warm fuzzy feeling you'll get from saving a perfectly good laptop from the great e-waste pile in the sky.

Apple might not thank you but the planet will. ®

*There's a technical explanation. Recent versions of MacOS require a 64-bit UEFI; these have a 32-bit one.