NASA’s off-again, on-again Mars digger nicknamed the mole is finally buried in the planet’s soil and will take readings beneath the surface next year.

If you’ve been following this Martian drama closely, you’ll know that the instrument, which came to the unforgiving dust world with NASA's InSight lander, has been in a spot of bother for more than a year. The probe was designed to burrow at least three metres into the Martian soil to take the planet's temperature.

Officially known as the Heat Flow and Physical Properties Package (HP3), the rod-like mole hammered itself about 35cm into the Red Planet after it was deployed in February 2019. It then got stuck in a type of soil NASA hadn't anticipated, and later bounced out, ruining its progress. The experiment's scientists decided to fix the problem by pushing the gizmo into the soil using a scoop attached to a robotic arm, allowing it to continue digging down. 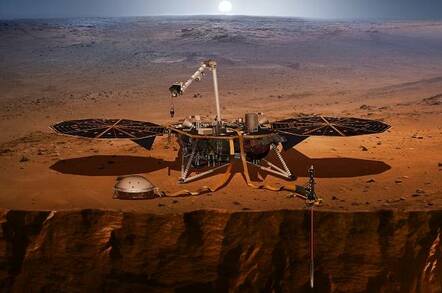 Probe ... Illustration of the InSight lander and its HP3 temperature sensor on the right ... Credit: NASA/JPL-Caltech

Now, NASA has reported the mole is fully embedded under the surface of Mars, and it should be up and running as an instrument early next year. Ground control will use the scoop to push soil on top of the probe to provide more friction for it to drill down further. Here's how NASA described the problem and the solution:

The mole was designed so that loose soil would flow around it, providing friction against its outer hull so that it can dig deeper; without this friction, the mole just bounces in place as it hammers into the ground. The soil where InSight landed is different than what previous missions have encountered: during hammering, the soil sticks together, forming a small pit around the device instead of collapsing around it and providing the necessary friction.

After the mole unexpectedly backed out of the pit while hammering last year, the team placed the small scoop at the end of the lander's robotic arm on top of it to keep it in the ground. Now that the mole is fully embedded in the soil, they will use the scoop to scrape additional soil on top of it, tamping down this soil to help provide more friction. Because it will take months to pack down enough soil, the mole isn't expected to resume hammering until early 2021.

“I'm very glad we were able to recover from the unexpected 'pop-out' event we experienced and get the mole deeper than it's ever been," said Troy Hudson, an engineer at NASA's Jet Propulsion Laboratory, who led the work to rescue the mole, on Friday.

"But we're not quite done. We want to make sure there's enough soil on top of the mole to enable it to dig on its own without any assistance from the arm." ®