Toshiba has said it is ready to start selling a commercial quantum key distribution (QKD) product, and will eventually move to offer QKD as-a-service.

Quantum key distribution, according to Tosh, involves "encoding each bit of the key upon a single photon (particle of light) transmitted, for example through an ordinary optical fiber. As any attempt to read the photons alters their encoding, this allows the secrecy of each key to be tested and guaranteed."

Thus what's on offer is not quantum computing or anything like that; it's a means for encoding information. Tosh's techies have published papers here and here if you're interested in the physics involved.

Toshiba knows a fair bit about this stuff thanks to the quantum tech lab it has run in Cambridge, UK, since 1991. The company’s expertise recently saw it hired to build a nationwide QKD network across Japan, and it has also teamed with BT and Verizon on commercial QKD services.

Now the manufacturer says this tech is ready to go on sale, and even be deployed by its partners.

Exactly what Toshiba will sell hasn’t been disclosed yet, however the biz says it will offer a “multiplexing platform that allows the data and the quantum keys to be transmitted on the same fiber,” and a “platform for long-distance applications that maximizes speed and distance of key delivery.” 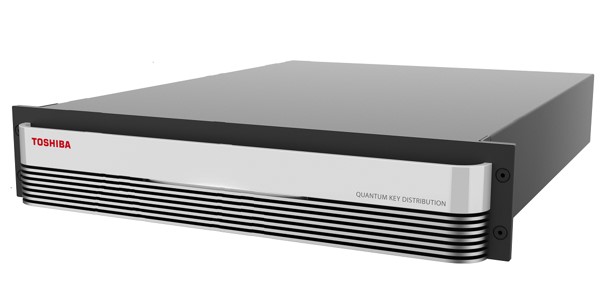 The company has also shared a picture of what looks like a 2U server that says “Quantum Key Distribution” on its fascia. And it said that by 2025, it will sell not only this physical gear, but also “launch a QKD service for organizations focusing on financial institutions.” Ergo, QKDaaS.

Senior veep and CDO Taro Shimada said the launch is all about giving businesses the tools they need as quantum computers become a reality.

“Sectors such as finance, health and government are now realizing the need to invest in technology that will prepare and protect them for the quantum economy of the future,” he said in a canned statement. “Our business plan goes far deeper and wider than selling quantum cryptographic hardware. We are developing a quantum platform and services that will not only deliver quantum keys and a quantum network, but ultimately enable the birth of a quantum internet.”

Leaving aside that last rhetorical flourish, the reference to protection is almost certainly a nod in the direction of those who believe future quantum computers will cut through current classical crypto like a knife through butter. Which is where things get interesting, because the world has seen this arms race coming. And now Toshiba is putting QKD on the market, some users will doubtless use it for less-than-entirely-scrupulous applications.

How will those nations that already demand backdoors react once that happens? ®