Dell has announced a new IT as-a-service (ITaaS) experience called “Project APEX” that it says unifies and simplifies the process of paying-as-you-go for enterprise tech.

The company has been here before: in just November 2019 Dell introduced “Technology On Demand”, which it described as its response to buyers that prefer consumption-based pricing.

Today Dell was at it again with an offering that adds a new “Cloud Console” Dell says will drive all of your IT, whether it be stuff it ships you or workloads in any of the big clouds. The Console will also let you order new Dell kit that’s pre-configured to run certain workloads and is promised to be racked, stacked and running in your personal bit barn within 14 days of your order.

Among those workloads is a storage-as-a-service platform that will run on-prem and launch in early 2021. On a call with The Register ahead of the launch, Dell mentioned desktop virtualisation as another workload that could be delivered. Execs also mentioned compute-as-a-service, data-protection-as-a-service and PC-as-a-service as future offerings.

Those offerings and more pre-configured workloads – including applications from a marketplace of third-party software – will all be offered with consumption pricing.

Kit can be owned and managed by Dell, or by a Dell partner. 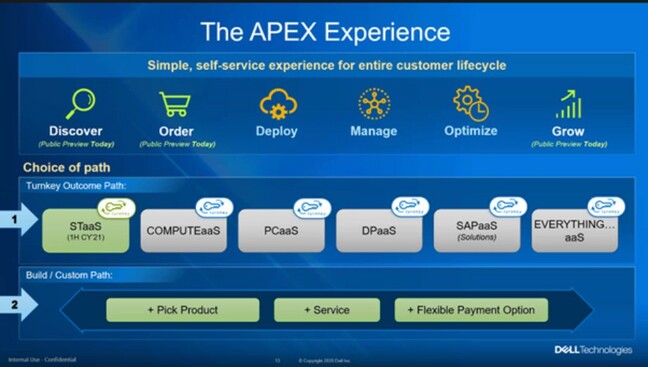 APEX looks like it will be most useful when used alongside Dell Technologies Cloud, an assertion we make because it is Dell’s integrated cloud platform and basically an encapsulation of VMware Cloud Foundation (VCF). APEX will be able to migrate workloads to and from public clouds when working with Dell Technologies Cloud, provided the public cloud also runs VCF. Happily, VMware has about 4,000 such partners. If vanilla hyperscalers or non-VMware clouds are more your thing, Dell promises APIs that allow integration between its Console and your preferred cloud, but your cloudy elasticity options will be limited.

If you want more on-prem capacity rather than bursting to cloud, Dell promises five-day delivery of extra kit.

Very little of APEX is available today. The Cloud Console is currently offered as a public preview in the USA, but EMEA users won’t get a taste until Q1 2021 and APAC customers are in a queue until sometime in H1 2021.

The storage-as-a-service offering will come to the US in the first half of 2021.

Sam Grocott, Dell’s senior veep for business units marketing, told The Register that APEX is a work-in-progress and will expand over time.

APEX arguably needs to nail it, quickly: Grocott cited analyst research that suggested 75 percent of on-prem IT will be bought as-a-service by the year 2024, up from five percent today. HPE’s GreenLake is already more mature than APEX is today and the hyperscale clouds are increasingly finding their way into on-prem options.

In Dell’s favour is that it has years of experience providing integrated bundles and converged systems, while VMware has cross-cloud management and pricing management tools. Creating a single management console and PAYG billing should not be a monumental task for Dell.

But nor should getting this right the first time, and it’s just eleven months since the company introduced Technology on Demand. ®