Microsoft has delivered on its threat to inflict Chromium Edge on Linux. Completist tendencies aside, one would be forgiven for wondering, "Why?" 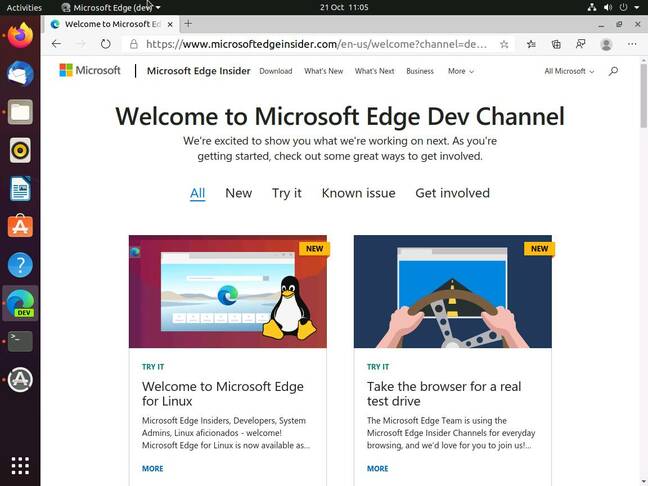 Edge on Linux had been lurking behind the bushes before its announcement at September's Build event. Indeed, Microsoft insiders had whispered to us that it had been running for a while, but booting it out of the door was not a top priority for the team. A good few months later and here we are: a Dev Channel version of Edge can be had on Linux.

The release officially supports Ubuntu, Debian, Fedora and openSUSE. Sadly, there is no love for Pi fans at present; the team are apparently "looking at Arm", but no release has been forthcoming. It took Microsoft a good while to craft an Arm-native version of Edge for its own flagship fondleslab, so anyone running kit of a Raspberry persuasion would be advised to avoid holding their breath. 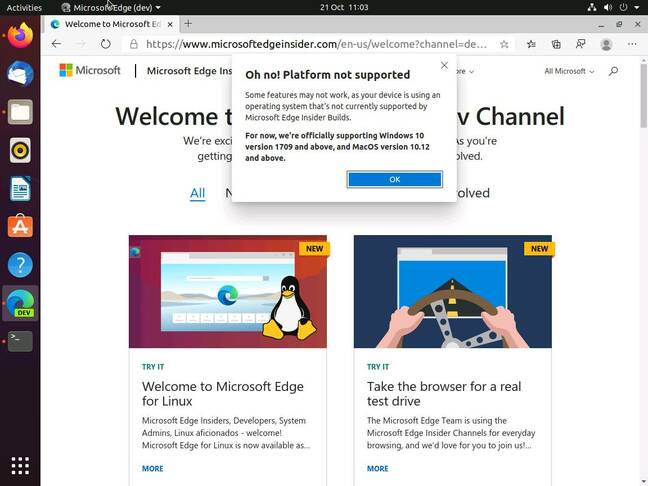 We took the release for a short run on Ubuntu 20.04, simply installing from the .deb file downloadable from the Edge Insider site. Other methods of installation are available, including command line instructions.

While performance comparisons would be unfair (this is not "stable" code), the browser performed admirably, although we'd be a bit nervous about using it as a daily driver. The version shows up as 88.0.673.0 and heck, even the Surf game worked.

As for the why, it seems an odd move at first glance. Linux is well served on the browser front, and we can't imagine many who are wedded to their Linux desktop will see the need for Microsoft's Chromium-fest. The Windows giant seems to agree, reiterating that its target is "developers who want to build and test their sites and apps on Linux."

Although the developer tooling (particularly the rendering) works well, other elements are... not so good. In particular, only local accounts are supported, so those hoping to use the syncing features that need a sign-in will be disappointed. 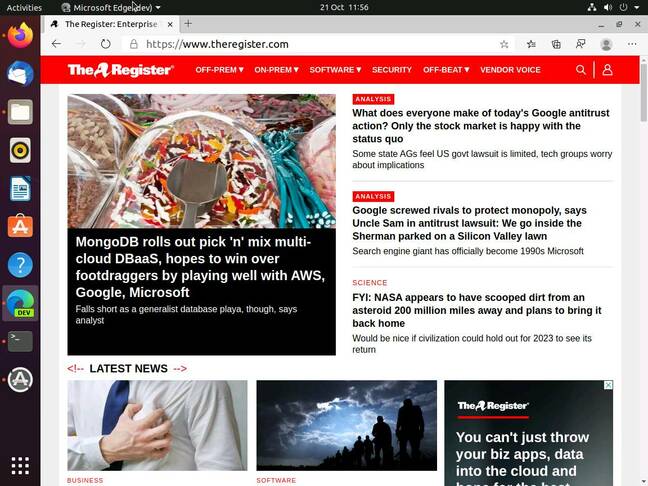 Still, this remains very much work-in-progress code and Microsoft stated that the features would turn up in a "future preview." Life in the Dev Channel means that weekly updates should be forthcoming.

The release is unlikely to set any usage charts on fire, however, the browser's arrival on Linux demonstrates the new Microsoft's keenness to meet developers wherever they may lurk, be it Windows, macOS and now Linux. ®